The July 2007 edition of "The Embers" is now available on line.
Posted by John Whitaker - The Blog Master at 5:03 PM

At the request of several members, we will be visiting a Santa Clara County Fire station for our July meeting.

On Thursday, July 5, at 7:30 P.M. our monthly meeting will be at the County's "Seven Springs" station, located at 21000 Seven Springs Prkwy, Cupertino, CA, 95014. This station is the home station for "Hazmat 2" and "Breathing Support 2." Our host will be Capt. Shawn Stevenson.

-- Thanks to John Whiteside for following through with the arrangements for this mtg. while "the Blogmaster" was on vacation
Posted by John Whitaker - The Blog Master at 10:46 AM

FASCV members have been closely involved with a recently opened Cal Fire lookout. Officials predict a busy fire season for the Bay Area. With the recent high temperatures, we're facing increased fire danger in the Bay Area. There are worries this summer could be a bad fire season. So, California fire officials have re-opened a fire lookout near Mount Hamilton that has been closed for 17 years.

FASCV member Mike Chappell has sent this link from abc7news.com. Their news crew was on scene to cover the opening. Be sure to watch the video which is included on the same page with the news story. It includes shots of Cal Fire personnel and volunteers -- like Mike Chappell, maybe.
Posted by John Whitaker - The Blog Master at 1:09 PM

Mountain View PD was first to arrive, eventually indicating it was fully involved and they were attempting to extinguish. Shortly thereafter, MTV E-2 arrived to report fire showing at the rear of a 1-story apartment complex.

The fire was in the middle of the complex and had easy access for fire crews. E2 extended a 1 3/4" line, followed by a 2 1/2" line. Due to exposure concerns, the IC requested one additional engine -- eventually going to a full 2nd alarm. 2nd-alarm apparatus included NASA Ames Fire Dept. (MOF) T-6 and a Palo Alto Fire BC to the scene along with Santa Clara County (CNT) E-1 to cover MTV Station #1.

The resident of the involved apartment was treated for burns to her hands and transported to a hospital. There was another female in the area with a reported leg injury. She was treated, but initially it was unknown how she was related to the fire incident, if at all.

Observing the unit of origin from the outside, it appeared that the fire was primarily a kitchen fire that spread to the front room. Smoke was also a problem for many neighboring units.

-- Thanks to FASCV responder Bob Gundrum for this information
Posted by John Whitaker - The Blog Master at 12:41 PM

Friday (June 01, 2007 @ 13:15) FASCV was paged to a Tier-3 grass fire in the Eastern foothills. The fire began at 2222 Terra Nova Lane, near the intersection of Nieman Blvd. and Yerba Buea Road in San Jose's Evergreen District.

John Whitaker responded in Support Unit 2, after first driving through the fire on the way to Station 26 to get the support unit. John was at home, near the fire scene, when the page went out and, as he drove over Yerba Buena Road on the way to the Hwy. 101 freeway, the fire crested the top of the hill along the shoulder of the roadway. Traffic stopped because of poor visibility just as Engine 21 arrived on the scene and requested police help to close the road. As traffic cleared, John made his way out of the smoke and returned with the support unit to the command post at the south end of Cadwallader Rd.

For complete information on this fire, go to this link in the San Jose Mercury-News. John's photos from the fire can bee seen at this link: Evergreen Tier-3

-- Thanks to the Blogmaster, John Whitaker, for this information

Posted by John Whitaker - The Blog Master at 8:00 PM

May 31st Joint Meeting A Success 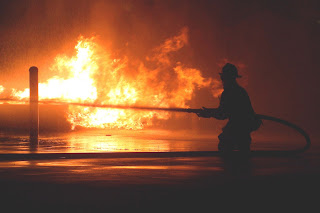 As members arrived, they were treated to an equipment display that included RHB1, the Peninsula Fire Buffs' new response vehicle; all SSFFD Station 61 equipment; SSFFD's medic units; and their new Battalion-17 response vehicle.

The evening was hosted by Deputy Chief Dick Dennen who welcomed all the attendees to the buffet dinner and tour of the new station and training facility. The station is a remodeled Black Mountain Water distribution facility, which lended itself to the open equipment bays and dorm/office layout that the fire department required. The training tower is a state-of-the-art, 7-story, steel-constructed facility. Deputy Chief Dennen personally led tours of the tower, explaining in detail how training personnel now have the ability to control both the interior fire environment as well as rearrange the interior floorplans.

The evening was capped off with a "live fire" demonstration. The crew from SSFFD Engine 61 demonstrated their ability to put out a gas fire while protecting the exposure of a propane tank. Arriving on the scene "Code 3", the engine crew quickly went to work and put on a very impressive demonstration of their skill.

All the members of FASCV would like to thank the members of the Peninsula Fire Buffs, and their president Bob Romanoff, for the invitation. It was an exciting evening.

Photos of the event can be seen at this link: FASCV Joint Meeting

Posted by John Whitaker - The Blog Master at 4:29 PM 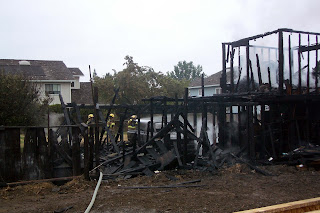 On Wednesday (May 30,2007 @ 05:07), Len Williams attempted to respond in Support Unit 1 to a 2nd-alarm structure fire at South Stelling Road and Lilac Way. Unfortunately, our response was "10-7" due to a dead battery. The problem was isolated to the interior dome lights being accidentally left on after the last use. Don Gilbert believes that the batteries should be on a trickle-charger anyway, so we'll soon be working on that solution.

John Whitaker, however, did respond and reports that the fire was quickly knocked down and the need for an FASCV response was minimal. More detailed information about the fire can be found at this link to The San Jose Mercury-News.

In the meantime, photos of the event are available for viewing at this link:
Stelling Road 2nd-alarm Fire