Sprinklers had been activated and there was a large amount of water on at least two floors of the dorms. The flooding was located on the 1st and 2nd floors of Tower "B" in the new dorm village complex. Bruce Dembecki responded with Fire Support 2 and was met on scene by John Whitaker.

Upon arrival, we were directed into a setup position by Med 30 and asked to hold for a few minutes before providing service. They were working to release some units and were trying to determine if we should start a coffee service. Ultimately, we were released before setting anything up. Fire Support Unit 2 was back at Station 6 and drying off at 10:15 A.M. 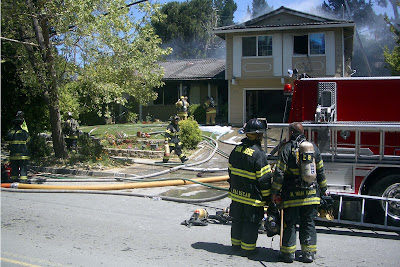 On Wednesday, May 5, a peaceful, Spring afternoon was interrupted by a call from the San Jose Fire Department. Two houses were burning on the city's south side. Located at 6090 Guadalupe Mines Rd., the fire was first reported as a kitchen fire in a two-story home. By the time a 4th alarm was called, the fire had almost fully engulfed the original home as well as a large portion of the house next door.

I was finally released with FSU #2 about 1736 after doing traffic control when police left and cars started piling up in front of fire rigs blocking the street. I must have talked to hundreds of drivers, lined up 7 and 8 deep in cars wanting to pass thru a blocked street! Almost unbelievable!!! Actually got hoarse from talking to so many drivers!!

Posted by John Whitaker - The Blog Master at 7:10 PM