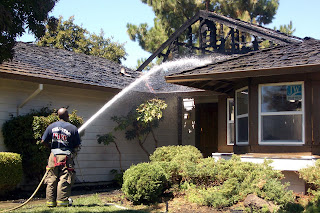 At 12:09 P.M. on Sunday, August 19, FASCV was dispatched to a 2-alarm house fire on the north end of Milpitas Fire's district. The fire was located at 1502 Michael Court - near the intersection of Michael Street and Evans Road. Bob Gundrum and Jerry Haag responded in Support Unit 1. Arriving later on scene was your FASCV "Blog Master", John Whitaker.

Unlike most house fires FASCV responds to, this fire gutted the main portion of the house, sparing the garage. Most house-fire responses seem to gut the garage, with firefighters working to save the house! This house was undergoing extensive remodeling, but the cause of the fire was unclear.
A news story descrbing the fire can be found at this link: The Milpitas Post. John's photos of the fire can be found here: MLP - House Fire.
-- The Blogmaster's busy schedule caused this late report...Sorry!
Posted by John Whitaker - The Blog Master at 1:40 PM

The September, 2007 edition of "The Embers" is now available on line.
Posted by John Whitaker - The Blog Master at 1:04 PM

On Sunday, 26 August, at approximately 1:00 AM, Don Gilbert responded in Support Unit #2 to a four-alarm fire at 1060 N. Fifth St., near San Jose's Japantown. Waiting for him at the fire scene was John Whitaker who assisted in setting up the rehab area in a nearby parking lot. The fire consumed a business called "So-Lite" - a manufacturer of lightweight roof tile. Clicking on the photo above will play John's low-resolution video of the fire scene.

The fire was declared under control at 3:40 A.M. and Don and John returned home at approximately 4:30 A.M. John's photos can be viewed at this link: SJS - Warehouse Fire. More detailed news about the incident can be read at this link to the San Jose Mercury News.

Posted by John Whitaker - The Blog Master at 8:31 PM

Bob Gundrum has announced that plans to meet for dinner prior to our September 6th montly meeting are as follows: Shanghai Restaurant, 253 E. Maude Ave. (TB: 812,F-6) - between Sunnyvale & Bayview Aves., at 6:00 P.M.

Click on this link for details on the September Meeting.
Posted by John Whitaker - The Blog Master at 5:41 PM 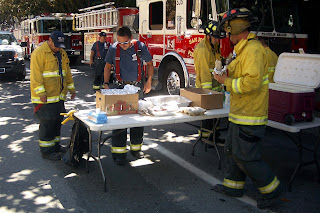 On Tuesday, 14 August, at approximately 12:17 PM, there was a request by San Jose Fire for Fire Associates service at a "Level II High-rise" incident at 60 N. Third St. in downtown San Jose. Your "Blog Master" (John Whitaker) responded in Support Unit #2 and was met by FASCV member, Mike Chappell. Before the afternoon was over, the incident had been raised to a Level III High-rise, and John and Mike had dispensed 150 burritos, 5 gallons of lemonade and several cases of water to the numerous crews who were on scene.

Engine 8 was the first to arrive. They were driving down Santa Clara Street, in front of San Jose City Hall, when passers-by alerted them to the smoke and flames one block away. The Engine 8 crew made the original radio notification. For those FASCV members who regularly listen to the fire radio scanners, this was not the usual “60 N. Third St.” radio dispatch: “Smoke alarm…Town Park Towers…First-due only.”

The Engine 8 crew initially found the fire roaring on the balcony of a 10th-floor unit with the fire spreading rapidly into the apartment. Although later-arriving crews were hampered by an elevator system that was put out of commission by the incident, fire damage was contained to the original apartment. However, the IC was faced with a logistical challenge as water damage from overhead sprinklers was extensive. Because of water and power issues, fire officials eventually evacuated the building after many of the residents were initially told to shelter-in-place. The 10-story building, known as Town Park Towers, houses low-income seniors.

The fire was contained about 30 minutes after firefighters arrived on scene and FASCV was released from service at approximately 5:00 PM.

Posted by John Whitaker - The Blog Master at 6:46 PM

Posted by John Whitaker - The Blog Master at 2:11 PM

Reservations have been made for 6:15 PM tonight at the Macaroni Grill, located on a parking lot pad on the Quimby Rd. side of the Eastridge Mall. This is the earliest time that was available, tonight. The restaurant assures us that this will be plenty of time to make our 7:30 PM meeting at SJFD Station 16, located close-by at 2001 S. King Road, 95122.
Posted by John Whitaker - The Blog Master at 12:48 PM