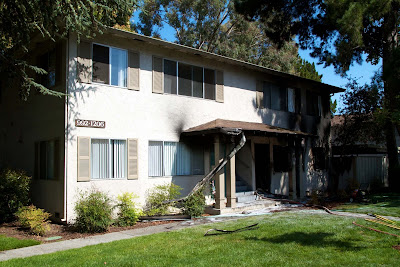 On Sunday, July 31, Sunnyvale DPS responded to reports of an apartment on fire at 1206 Henderson Ave. in Sunnyvale a little before 3:00 P.M. Arriving units reported flames out the windows of a ground floor apartment, and a second alarm was struck. The fire damaged the front of building units on both the first and second floors, as well as some damage into the attic, before it was quickly contained. 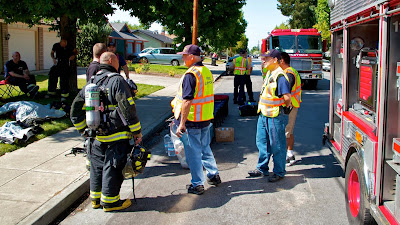 Sunnyvale units handled the first and second alarm, while Sunnyvale called on some Mutual Aid units for station coverage.

Support Unit 1 was released a little after 4:30 P.M.
-- Report and photos submitted by Bruce Dembecki
Posted by John Whitaker - The Blog Master at 3:00 PM 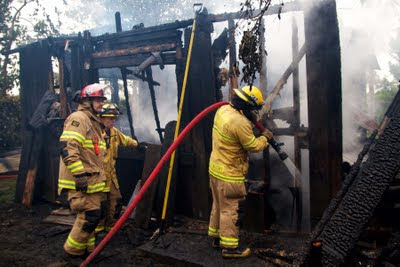 Units from South County/Cal Fire and County Fire responded, and at 5:31 A.M., South County Engine 1 reported they were on scene of a structure fire with a multiple structures fully involved, requesting a second alarm at that time to 15520 Monterey Road. Additional Santa Clara County units were dispatched along with mutual aid units from San Jose and Gilroy. By 6:00 A.M., the page had gone out to Fire Associates to respond a Support Unit, and Don Gilbert was joined in Support Unit 3 by Bruce Dembecki, and they were met on scene by Dan Wong.
Behind the main house, two pool houses and a treehouse, connected to the house with flaming wooden trusses, were fully involved. A good stop was effected by units on scene, preventing spread of the fire to the connected house, or the many surrounding buildings used to store tools and supplies for the owner's hardwood flooring business. Had the 911 call been further delayed, the impact would have been far worse.
The incident was under the command of County Battalion 12, B/C Salazar, driving his brand new Battalion 12 buggy, which he picked up from the County shop just two days earlier. Coffee and donuts were popular at the early hour, and by mid morning, cold drinks were the order of the day. Support Unit 3 was released at around 10:00 A.M. and made it's way back to quarters at San Jose Station 35.
Posted by John Whitaker - The Blog Master at 6:01 AM

Posted by John Whitaker - The Blog Master at 3:26 PM

Bruce drove FSU-2 to the fire, Jerry Haag drove it back to SJFD Station 6.


In the late afternoon on July 21, Fire Associates responded to its second fire of the day. The following report comes from John Whiteside:

After listening to the radio traffic, time of day, and the multiple agencies dispatched, I went to SJ Station 35, asked Morgan Hill if they wanted a Fire Support Unit, they answered with an emphatic “AFFIRMATIVE”, so I initiated the page. We departed Station 35 about 1745 and were released about 2220 after supporting the feeding of crews at the scene. Supply 1610 brought in 200 burritos. Due to a late morning brush fire in San Jose, some of the Cal Fire engine crews had not eaten since breakfast.

Posted by John Whitaker - The Blog Master at 5:00 PM

Santa Teresa Grass Fire Is First Event of the Day

On Thursday, July 21, a late-morning grass fire caused San Jose Fire Dispatchers to call for Fire Associates help. The fire was located at Heaton Moor Dr. at the intersection with Bernal Rd. The Staging location was at the entrance to the Santa Teresa Golf Course on Bernal Rd. Instead of responding in Fire Support Unit 3 (which is usually housed near the fire's location), Don Gilbert responded in Support Unit 1, which happened to be in his driveway undergoing some upgrades. Support Unit 3 had been temporarily moved to Santa Clara.
Bob Gundrum has submitted the following report:
It was around 11:30 in the morning, FASCV was requested by SJFD as part of their Tier III, which included Cal-Fire.  Turns out the fire was just above some sort of waterway, which placed it in State Responsibility Area (SRA).  I did not hear all the dispatches, so I don't know all the equipment that was sent.  When I got there, no aircraft were being used - if ever used.  Do not remember when we were released, but it was the same time as the last SJFD unit.
I was there to return the FSU-3 to it's usual location and pick up FSU-1 which responded from Don's residence.
FASCV members in attendance were: Don Gilbert (driver), Mike Chappell, Herman DeKruyff, Bob Gundrum and George Hoyt.
Posted by John Whitaker - The Blog Master at 11:30 AM