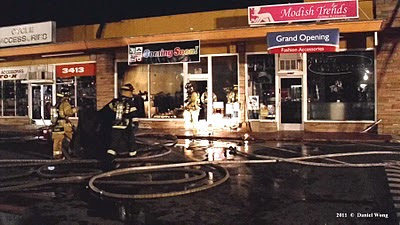 
It was just a little before 5:00 P.M. on September 19, when the San Jose Fire Department asked for assistance from Fire Associates at a 5-alarm structure fire. A fire had begin in one of the city's old victorians located at 272 E. Washington Street. With summer temperatures hovering in the mid 90s, John Whiteside responded in FSU-3 and Don Gilbert brought FSU-02. They were met on scene by FASCV members George Hoyt, John Whitaker, Ron Gree, Mike Chappell and Dan Wong.

It was a good thing both support units were on scene. The approximately 100 firefighters present were going through an average of a bottle-and-a-half bottles of liquid for every hour they were on scene. FASCV gave out almost every bottle of water and Gatorade that was brought on both vehicles! In addition, every bag of ice that was brought was also used up. On top of all this, the fire began right before the dinner hour, so hungry crews had to be fed. 90 burritos were ordered up by SJFD Communications personnel with John Whitaker and Dan Wong volunteering to go pick up the order.

Despite the very hot temperatures, firefighters made a good stop on the blaze. The structure was fully involved, but neither of the adjacent homes were damaged. Fire was present on every floor of the involved home, built in 1892. Fire Associates provided assistance in a very busy rehab area until released at approximately 9:30 P.M. It should be noted that the temperature had only dropped to 78 degrees at the time of release!

Posted by John Whitaker - The Blog Master at 4:49 PM

At around 9:00 P.M. on Friday September 16, FASCV received a request from San Jose Fire to provide assistance to the San Jose Police Department during an extended operation. The police officers were searching for a serious offender after a shooting and car jacking that occurred earlier in the day. After locating the suspect's car, officers were involved in a pursuit with shots fired a little before 6:00 . The offender escaped on foot into a nearby residential area.
A very thorough search of the area was initiated, with Special Operations Police, K9 units and the Police helicopter all working to locate the suspect, while another large team of officers secured the perimeter. As the evening wore on Police realized that it was going to be a long night and requested FASCV through the Fire Dispatch center. The Fire Department also helped out with the portable restrooms, and they had USAR 34 on standby to assist with the search.
Bruce Dembecki responded with Fire Support Unit 2 and was on scene before 10:00pm, where he was met by FASCV members Ron Green and Mike Chappell. FASCV setup a rehab station next to the Police Command post, and provided Hot and Cold drinks and Cliff Bars to go with the In-N-Out burgers the Police Dept had arranged to feed it's teams. As the night wore on Coffee became increasingly popular, while we sent cases of water out to the field units.
FSU 2 was released around 2:30am, and we left 2 pots of fresh coffee and a supply of Cliff bars for the PD units still searching. While the Friday night search was not successful, the Police Department did get their man a couple of days later.
-- Report Submitted By: Bruce Dembecki

Posted by John Whitaker - The Blog Master at 8:51 PM


At 3:30 on Wednesday September 14, FASCV responded to a multi-alarm fire burning through an apartment complex on Bear Valley Lane in San Jose. Arriving firefighters were confronted with active fire through the roof of a 2-story residential structure, and quickly discovered the garage building for the units was also ablaze.
As the fire started to run the building's attic space, Incident Commander B/C 1B Robert Sapien requested a third alarm, which initiated the automatic FASCV response. John Whiteside and Bruce Dembecki responded to Fire Station 6 to pick up Fire Support Unit 2 and headed to the scene. They were met on scene by FASCV members Don Gilbert, George Hoyt and Jerry Haag, along with guest Walter Huber.
On this warm afternoon, firefighters went through large amounts of water, Gatorade and lemonade in a busy Rehab section.


A peaceful Tuesday evening was interrupted by the sound of an "explosion" at a Palo Alto apartment complex. Initially responding to the incident in his personal vehicle was FASCV vice president Jerry Haag. He was joined later by Larry Carr in Support Unit 4 who responded to a page for help from Palo Alto Fire.

Jerry has submitted the following report:

Posted by John Whitaker - The Blog Master at 7:30 PM 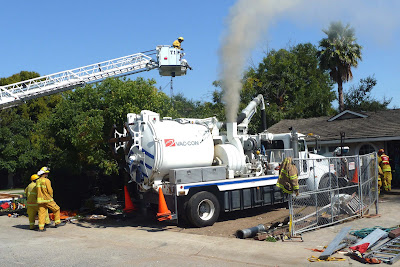 In the late morning on September 12, Santa Clara County Fire personnel were called to a rescue operation in Saratoga. Located at 12370 Radoyka Drive, a construction worker was trapped in a trench that had been dug next to a home's foundation. Suspecting that the rescue would require an extended operation, FASCV member Bruce Dembeki called fire dispatchers to see if FASCV could be of assistance. The response was, "Yes!"
While Bruce went to get Fire Support Unit 2, Ron Green, George Hoyt, Dan Wong, Don Gilbert and John Whitaker reponded to the scene. Rehab was set up in a shady driveway several doors down from the incident. FASCV provided lemonade, cold beverages, Clif Bars and a place to sit down on a warm, summer afternoon. As the event moved into it's third hour, Ron Green and John Whitaker were tasked with ordering and delivering 50 Togo's sandwiches from a nearby store.
The incident proved to be a very complicated effort. The trench had been dug right next to the house foundation where a worker was looking for the source of a leak in a recently-built basement. While in the trench, the dirt collapsed and he was buried up to his neck. Firefighters quickly called for a City of San Jose Vacon truck that was able to suck up the loose dirt. Conventional digging was just causing more dirt to fall into the narrow trench. The worker was eventually hauled out on a backboard with block and tackle rigging hung from below the basket on Santa Clara County Fire Truck 1.
Posted by John Whitaker - The Blog Master at 11:35 AM

On Sunday morning, September 11, members of Fire Associates provided coffee and beverages to those attending the 9/11 Memorial ceremony at SJFD's Station No. 1. Bruce Dembecki, Ron Green (with Barbara) and John Whitaker (with Liz) all attended the event.

Bruce Dembecki arrived with Fire Support Unit 2 at approximately 10:30 A.M. and set up a coffee service area inside the vacated apparatus bay at Station 1, located at 255 N. Market St. Ron Green assisted Bruce with the set up and helped to make sure a fresh pot of coffee was always available to the 1,000-plus attendees. While John Whitaker was also on hand to help with the set up, his primary activity centered around supporting the San Jose Fire Museum - a co-sponsor of the event. John's volunteer efforts with the Museum lead to his production of the 12-page program for the day's activities.

A highlight of the ceremony was a display of 343 pairs of turnout boots arranged in front of the podium at Station 1. Each pair of boots, signifying public safety personnel who lost their lives 10 years earlier, was tied together with a black ribbon and the name of someone who gave their life. A small, American flag was also placed in each boot.

Posted by John Whitaker - The Blog Master at 1:00 PM