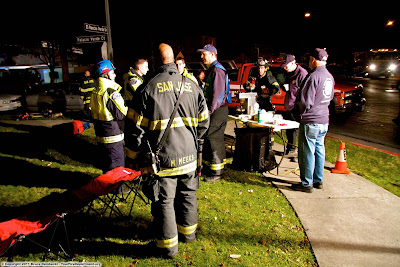 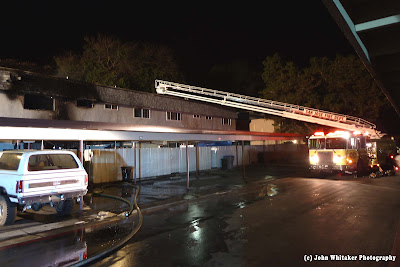 The apartment was fully engulfed when the first-arriving fire crews came on scene. This caused a very quick 2nd alarm to be called and ultimately led to a 3rd alarm because of the attached apartments and the close proximity of other buildings. Also, a carport was located to the rear of the apartment with several cars in danger of adding to the inferno.

Rehab had not been established by the time FASCV arrived on scene. So, at the direction of SJFD Med30, a rehab area was established on a large lawn at the intersection of Cartago Ct. and El Rancho Verde Drive. Firefighters enjoyed a place to sit down while AMR took vitals, and coffee, Clif Bars and Gatorade were the refreshments of choice. Fire Associates was released at 11:00 P.M.
-- Accompanying photos by John Whitaker and Bruce Dembecki

Posted by John Whitaker - The Blog Master at 8:28 PM 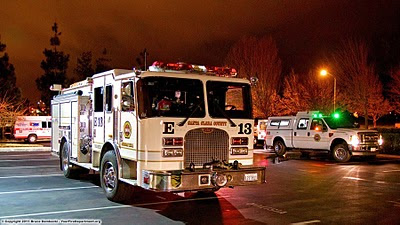 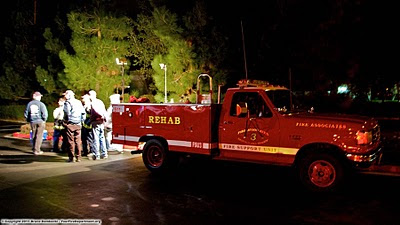 Santa Clara County Fire called for Fire Associates' aid on Monday evening, just at the end of the Valentine's dinner hour. At 7:48 PM, FASCV was paged to a factory fire at 18410 Butterfield Blvd. near the cross with Jarvis Ave. Don Gilbert and John Whitaker responded to Morgan Hill in FSU-3. They were met on scene by FASCV members Bruce Dembecki, Mike Chappell and Ron Green.

The first-arriving County Fire units found a heavy column of smoke coming from the center of a large, tilt-up structure occupied by Tencate Advanced Composites. County Fire was joined on scene by South County Fire District, Gilroy Fire Dept. and San Jose Fire Dept. rigs who arrived as part of a mutual aid response. Once the fire was knocked down, crews had to deal with a hazmat clean up operation. The fire apparently was the result of chemicals that "over cooked" and the resulting smoke and fumes were not easily vented. The hazmat situation meant that the rehab area was also staffed by 3 American Medical Response medic rigs as well as an AMR supervisor.

Fire Associates provided the usual hot coffee, cold beverages and Clif Bars until we were released at approximately 11:00 PM. Fire crews greatly appreciated the response on a night when most husbands are home with their wives!
-- Accompanying photos by Bruce Dembecki

Posted by John Whitaker - The Blog Master at 7:48 PM