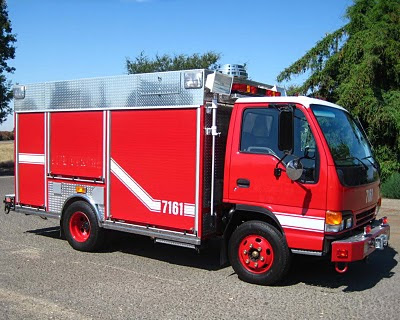 On April 5, Fire Associates made a major new purchase. We have acquired a 1997 GMC/Isuzu that was a former rescue truck for the Carmel-by-the-Sea Fire Dept. And, although the vehicle is 13 years old, it amazingly only has 4,650 miles on the odometer. The purchase was made using money from our treasury with no additional fund raising needed.
The vehicle will now undergo some modifications. Although it already has exterior area lighting, telescopic floodlights, emergency warning lights and all the necessary shelving, there still need to be some additions.

Work has already begun. Fleet Manager Don Gilbert, along with John Whitaker and Bruce Dembecki were hard at work earlier this week removing the old lettering and graphics so our new design can be applied. It took a lot of elbow grease as the old lettering had been out in the sun and was pretty-well baked on! A water tank has been test fitted and will be installed along with the pump. The Whelen emergency lights need to be changed from red to amber, so the lenses are now on order from WATTCO and will be installed when they arrive. We currently have a 5000W Honda generator that will soon be installed into the existing equipment bay. Although not as silent as the generator purchased for our last new vehicle, it can be replaced if it proves to be too noisy.

Although no final decision has been made by the Board, we expect that this rig will go into service in the north county area. The current Ford 350 (Support Unit 1) would then be moved to the south county and replace our reserve 1981 Dodge (Support Unit 3). That would mean that our organization, for the first time, will have three primary response units!

Thank you to all the firefighters who regularly contribute funds to our cause. It is this funding that has made this purchase possible. Take a look at the following photos and stay tuned for further announcements.

Posted by John Whitaker - The Blog Master at 2:09 PM