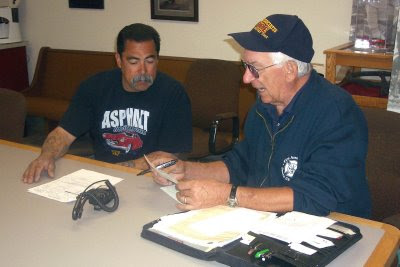 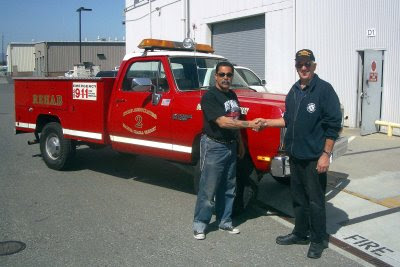 This is the first Fire Associates vehicle to become part of the extensive collection. The Museum Board voted to accept vehicle because the support units are part of the history of the San Jose Fire Department. The vehicle will be on display for the public and the Museum will use it as a service vehicle for their fleet. 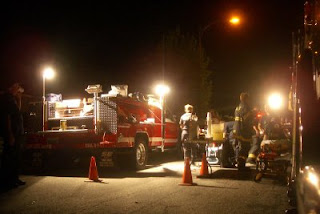 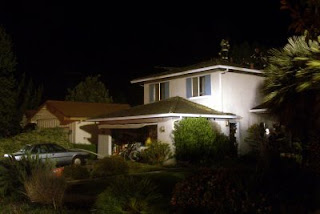 On Tuesday night, April 21, as Support Unit 2 was on the road returning from the FASCV monthly meeting in Los Altos, San Jose Fire called a 2nd alarm for a house fire. As luck would have it Support Unit 2 was very close to the fire, loaded with ice, and staffed with 4 FASCV members. The obvious decision was made -- Head to the fire!

Located in the 6100 block of Tracel Dr., near the intersection of Miller Ave. and Prospect Rd., the fire involved most of the attic space above a two-story, single-family residence. Cruising down Interstate 280, near De Anza College, Support Unit 2 was so close to the location that it was in staging well before most of the 2nd-alarm fire rigs. Needless to say, a lot of the responding firefighters were surprised to see us already on scene!

Responders included Don Gilbert, John Whiteside, Fred Oehm and John Whitaker. Soon after arriving, contact was made with the IC and Med 30. The decision was made to set up Rehab on the east side of the fire. Med 30, Support Unit 2 and AMR relocated from staging and quickly had Rehab up and running. Even though it was well after 9:30 P.M. on an April evening, temperatures from the warm day stayed mild and cold drinks were much more in demand than hot coffee. It's good that Don had been proactive and loaded ice on the rig before leaving the Station. A lesson learned.

Rehab was broken down at approximately 11:00 P.M. and Support Unit 2 and it's crew continued on to Don Gilbert's home. Earlier in the day, Don had relolcated the Support Unit from Station 26 to his home so its passengers could all meet in one place and go on to the meeting site. At the end of the evening, everyone all had to return to Don's to get their personal vehicles. Because of the late hour, Don returned the Support Unit to Station 26 on the following day.

Photos from the event can be seen a Bruce Dembecki's site at this link: Tracel Dr. Fire. Bruce had attended the FASCV Monthly Meeting as a guest, and detoured to the fire scene when he heard it dispatched on his scanner.
Posted by John Whitaker - The Blog Master at 9:15 AM

Just a Reminder for Blog Readers

The photos that are included with a blog article can be instantly viewed in a larger format just by clicking the photo with your cursor. Now you know! 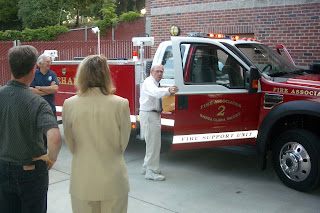 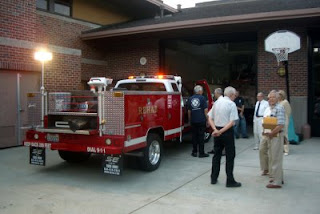 On Tuesday evening, April 21, Fire Associates held their monthly meeting at the El Monte Station in Los Altos. The meeting was held much later in the month than usual to accommodate the wishes of the Los Altos Hills County Fire District Board. The Board was a major contributor to our recent "New Rig Fund Raising Drive" and we wanted to bring the new Support Unit 2 to their Board meeting as a "Thank You" for their generous contribution.

The event was well attended by members of both FASCV and the LAHCFD. The new rig was parked in the driveway of the station with the 6000W generator fired up and the floodlights blazing! The Board members were very interested in the new rig and many walkaround "tours" were given. By the end of the evening, everyone on the LAHCFD Board was in agreement that it was money well invested.

John Whitaker's photos of the event can be seen at this link: FASCV April Meeting 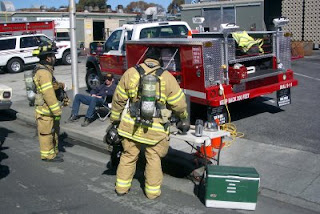 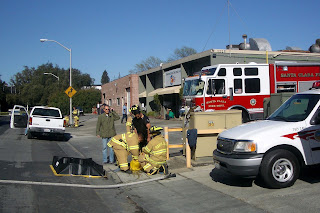 Just as the FASCV crew was breaking down the rehab for their previously described early-morning response for San Jose Fire, their pagers announced a need for their services in Santa Clara. Called to 1280 Memorex Drive for a Hazmat incident, the crew quickly packed up Support Unit 2 and headed off to Santa Clara. Paged out at 8:48 A.M., the call involved a leaking 500-gallon vat of acid.

This was a rare call for Support Unit 2, as Support Unit 1 usually handles calls in the City of Santa Clara. But, since Support 2 was already relatively nearby, and the normal FASCV responders for Santa Clara were not available, this was a chance for FASCV to make it's first response into the city with the new support unit. The Support Unit 2 was on scene for approximately 4 hours and was released at approximately 1:00 P.M.
Posted by John Whitaker - The Blog Master at 7:49 PM