﻿﻿﻿﻿﻿﻿
Just before 3:00 a.m. on a cold, wet and windy February Leap Day, San Jose Fire Department responded to reports of a house on fire at 1103 Denise Way. Arriving firefighters were greeted by heavy smoke and flames shooting through the roof, fanned by the heavy winds. The incident was upgraded to a second alarm.

Residents were awakened by the sound of flames on the roof, while the residents in the adjoining unit of the duplex were roused by pounding on their front door. Everyone escaped unharmed, but the building and contents were destroyed.

Posted by John Whitaker - The Blog Master at 3:10 AM


Mid-afternoon, February 28, FASCV member John Whiteside was at San Jose Fire Station 35 putting away rehab supplies and setting up a GPS unit in Fire Support Unit 3, which is housed there. About 1510 hours, San Jose dispatched a full first alarm (3 engines, 2 trucks, 2 BCs and Med 30) to a house fire in the northeast section of town. First arriving units reported heavy black smoke from a triplex, single-family house at 1793 Commodore Drive, cross street of Cape Jasmine Place. A fire attack was initiated but soon the fire became defensive, fought with master streams from the elevated ladders. A 2nd alarm was requested bringing additional engines, truck, BC, and the breathing support unit.

John remained at Station 35 monitoring the radio and from the reports he sensed, even though it had not gone to a 3rd alarm, the usual trigger for Fire Associates dispatch, we would be requested due to the extent of the operation.

At approximately 1620 hours, John heard radio discussion between Med 30 and the Incident Commander on the need for Fire Associates, and then the request for Dispatch to notify us. John immediately replied via radio to acknowledge the request and initiate a response. About 1630, he departed Station 35 in FSU 3. After arriving on scene and setting up near Rehab, he was soon joined by George Hoyt, Jerry Haag, and Mike Chappell. Later, Jerry and George picked up food for 30+ fire personnel, and after supporting the meal process, FSU 3 was released. John got home around 2120 hours. The Red Cross assisted the displaced occupants.
-- Report Submitted by John Whiteside

Posted by John Whitaker - The Blog Master at 3:00 PM 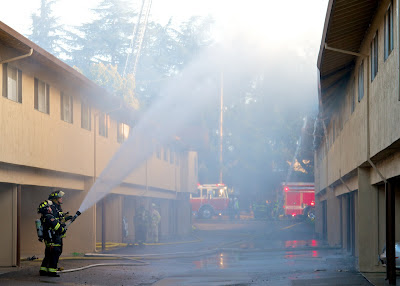 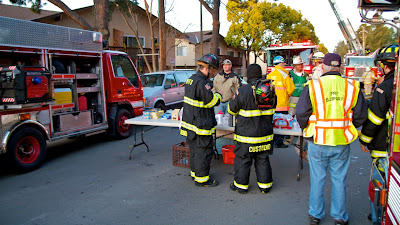 On Monday night, 26 units in the complex were uninhabitable. The Red Cross, with the assistance of the Mountain View Whisman School District, opened a temporary emergency shelter at Landels Elementary School to assess the basic needs of the residents.

By early evening it was clear we were in for a long night, and Bruce Dembecki was dispatched to collect meals for the large team of first responders on the scene. Dinner was served around 7:30, and both hot and cold drinks went fast as hard working fire fighters took a few minutes here and there to recover from their exertion. With crews fed and the situation calmed down to a quiet roar, Fire Support Unit 1 and the FASCV crew was released at 9:30 p.m.

Posted by John Whitaker - The Blog Master at 3:53 PM

First arriving company, Engine 4, found a fire in an advanced stage of development and reports of possible persons still inside and exposures on B and D sides with electrical cable hazards. Engine 40 provided the large diameter water supply to Engine 4 while Truck 2 came in and readied an elevated stream. Engine 4 ultimately deployed two 1-3/4" and two 2-1/2" attack lines and also a large-diameter supply line to Truck 2. Engine 30 deployed another attack line from the parallel street to the North (Devonshire Way). Subsequently, it was learned that the four occupants of the house were out of the country on vacation.
-- Report Submitted by Jerry Haag
Posted by John Whitaker - The Blog Master at 1:15 AM


At 5:38 A.M., on Monday February 20, the San Jose Fire Department requested Fire Associates' assistance at a second-alarm commercial building fire. Located at 1050 Blossom Hill Rd., San Jose, a fire had started in a second-story tattoo studio and had spread to the attic. Firefighters arrived on scene shortly after 5:00 A.M. and reported flames shooting out of windows on the second floor, and immediately requested a second alarm.

Firefighters were able to quickly contain the blaze and prevent fire damage to the businesses on the ground floor, although there was some water damage.

Posted by John Whitaker - The Blog Master at 8:00 AM

A quiet Wednesday morning was suddenly made more interesting when a fire broke out in The Kelly House in San Jose's Kelly Park. John Whitaker actually received word of the call using the new SJFD-sponsored PulsePoint emergency "App" on his iPhone. Introduced at a press conference on February 14, the new app allows smartphone users to be alerted to emergency incidents in San Jose. (Interesting side note: The alert was received by the app even before the first radio dispatch. Now that's speedy!)

The first-arriving firefighters reported the "alpha" side of the structure was fully involved and announced "this would be a defensive fire." A second alarm was quickly called and John took the initiative to call SJFD radio dispatch. He asked if the Kelly IC would like a Fire Associates response and the quick reply was, "Affirmative".

John responded in Fire Support Unit 2 and was joined on scene by George Hoyt, Ron Green, Dan Wong and Mike Chappell. As directed by Med30, Rob Brown, Rehab was set up in a picnic area near the IC. The picnic tables, trash cans and shade made for a very efficient Rehab operation. Coffee was made by the pot full and Clif Bars and Gatorade were also in demand. By noon time, hungry crews were fed with burritos and more beverages.

Unfortunately, the structure appeared to be heavily damaged. The Kelley House was built in 1912 and originally belonged to one of San Jose's pioneer families. Although historic, the 5,600-square-foot two-story Victorian has been vacant for years.
Posted by John Whitaker - The Blog Master at 6:48 PM