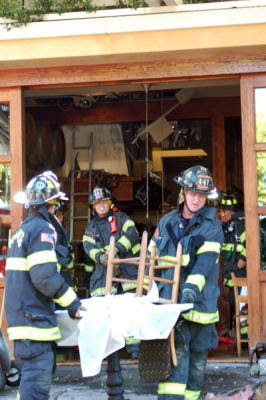 Shortly after Fire Associates Board members had adjourned their afternoon meeting at Station 26 in San Jose, our pagers became very active.

1) First to call for our service was Palo Alto Fire. FASCV was paged at 2:57 P.M. to 420 Emerson Street in that city for a 2-alarm fire in a restaurant. Bob Gundrum and Jerry Haag responded with Support Unit 1. They were on the road returning from the Board meeting when the call arrived. Jerry Haag has submitted this report:

Remarks: Gundrum and Haag responded from SJS Station 26. No other members from NW County were available.

** Above photo by Will Oremus/Daily News 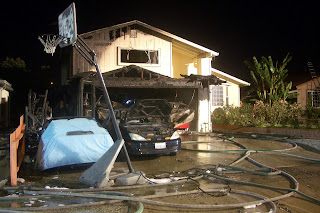 2) Then, at 6:18 PM, San Jose Fire issued a request for Fire Associates. This time, a house was on fire at 1370 Mocho Court -- near the intersection of Tully Rd. and McLaughlin Ave. John Whitaker responded in Support Unit 2 and he was met by FASCV member George Hoyt. This being a 3-alarm fire in a residential neighborhood, space was at a premium. Upon arrival, John found streets full of fire equipment and a maze of hoses leading from several hydrants to the blaze.

The closest the Support Unit could get to the scene was 2 blocks away. Med 30 directed that their only need was for cold water, as his supply was running low. Later in the evening, George made a meal-run (burritos) at the direction of the IC. Meals were provided for the two engine companies and one truck that were staying to do the extensive overhaul.

Posted by John Whitaker - The Blog Master at 3:14 PM 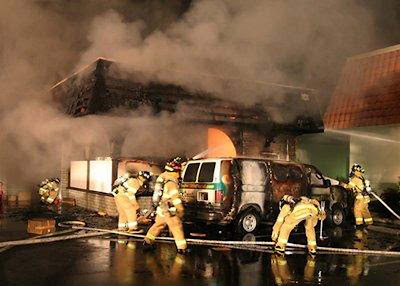 On Friday morning, Sept. 18, the Fire Associates' pagers came to life at 2:46 A.M. with word of a multi-alarm fire in the City of Santa Clara. Located at 800 Scott Blvd., the fire was at the Citti's Florist building. Jerry Haag answered the call, taking Support Unit 1 to the incident. Jerry was joined on scene by FASCV member, Ron Green. Jerry has submitted the following report:

Details: Single story, small, free standing commercial building (Citti's Florist). Fire started in or adjacent to a delivery van parked in near proximity to the building. Fire spread into the overhanging fascia and was largely confined there due to quick effective action by first arriving engine and truck. Overhaul was minimal so our services were not required for very long. Second alarm and mutual aid (SJS) units were quickly released.

Remarks: Gundrum had to handle paging since Sonitrol computers were temporarily down.

Addition information can be viewed at the following link: 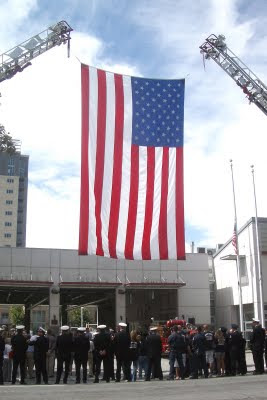 On Friday, September 11, the San Jose Fire Department hosted an area-wide memorial ceremony honoring the victims and heroes of the 9/11 World Trade Center tragedy. Held at Fire Station No. 1, the event was emceed by Batt. 1A Chief, Kevin Conant and featured speeches by San Jose City Mayor, Chuck Reed, and Fire Chief, Darryl Von Raesfeld. The scene was framed by an American flag hung from the ladders of San Jose's two new tillered aerial trucks, and flanked by an antique fire engine from the San Jose Fire Museum. The nation's colors were presented by San Jose Fire Dept. Honor Guard and music was supplied the San Jose Fire Dept. Chorus. At the conclusion of the event, a wreath with the words "911 - Never Forget" was placed at the memorial bell by the City's mayor and fire chief.

John Whitaker's photos of the event can be viewed at this link: San Jose's 9/11 Memorial


Ten responses in twelve days!!! Yep, that's what we said. After a below-average number of calls over the past several months, the dam burst during the first half of September.

It all began on the afternoon of September 2nd with a Tier 3 grass fire on San Jose's Communications Hill. We'll describe that response and then list the rest from there...

Posted by John Whitaker - The Blog Master at 5:43 PM