Details:
Two-story apartment house.  Fire started in the garage. Fire Associates arrived at 2:46 P.M. and was released at 6:00 P.M.

On Sunday night, April 24, at approximately 11:40 P.M., Santa Clara County Fire (CNT) received reports of a structure fire at 354 N. Santa Cruz Avenue. The location was only a couple of blocks from County Fire's Station 83, “Los Gatos Station”. So close that the crew later stated they could smell smoke as they left the station.
Upon arrival, they reported flames visible inside structure. The fire was in the attic of "Double D’s Sports Grille", a popular sports bar and restaurant. Within minutes, a full first alarm was filled out and a 2nd alarm was requested by the Incident Commander, bringing additional County fire crews to the scene.
John Whiteside, who was monitoring the radio at home, heard the initial dispatch. He anticipated a Fire Support Unit request and was preparing to respond. At 12:17 A.M., Fire Associates was paged to respond an FSU to the scene, and John responded with Fire Support Unit 3 from San Jose Station 35 -- about 8 miles from the fire. As John was en route, the IC called a 3rd alarm, which brought a mutual aid structure response from San Jose.
Upon arrival, John was met by FASCV member Mike Garcia and guest Walter Huber. After helping set up Rehab next to the on-scene ambulance crew, Mike went to locate and purchase some ever-popular donuts. Portable benches, Gatorade, water, CLIF bars, lighting, and hot coffee in the cool early morning air, were provided.

The extinguishment efforts were difficult as there were 3 different roofs atop the building. The stubborn fire just kept advancing through the attic and small pockets of fire kept appearing when hoses were shut down. The fire was declared under control about 2 hours after first-arrival. Crews remained through the night and into the next day. Fortunately, firefighters managed to save many treasured sports memorabilia items that were on display in the restaurant.
Fire Associates personnel were released at 3:45 A.M.
-- Report submitted by John Whiteside
Posted by John Whitaker - The Blog Master at 11:40 PM

On April 23, at a few minutes past 4:00 P.M., Gilroy Fire dispatched units to a report of a fire in the vicinity of Luchessa Avenue and Rossi Court. Upon arrival, it was determined to be located at METech, 6200 Engle Way. The company is a permitted electronics and e-waste recycling facility for the entire San Francisco Bay area.
The fire was burning in an outside storage area that contained piles of recycle materials. The heavy black smoke could be seen for miles!
Within a few minutes, the fire response was increased to a 3rd alarm, bringing additional fire units from Hollister, South Santa Clara County Fire District, Morgan Hill, San Jose, Santa Clara County, plus California Fish and Game for possible contaminated water runoff. On scene there were 11 engines, 3 ladder trucks, 2 breathing support units, 1 hazmat unit, and 4 chiefs. Additional engines back-filled empty stations in Gilroy and Morgan Hill.
Fire Associates was requested and John Whiteside responded with Fire Support Unit 2 for the approximate 30-mile drive. Bill Roth met John on scene and together they set up rehab with benches, tables, water, Gatorade, CLIF bars, scene lighting, and later, coffee. FASCV member George Hoyt also assisted. Gilroy Fire provided 80 sandwiches with chips for the group. FSU-2 was released at 9:45 P.M. -- arriving back in quarters at 10:30 P.M.
-- Report submitted by John Whiteside
Posted by John Whitaker - The Blog Master at 4:00 PM

In the early afternoon on Friday, April 15, a fire was reported in a Sunnyvale apartment complex. The complex was of late 50’s, early 60’s construction, 2-stories in height, with apartment unit access via interior hallways. Located at 1066 Sunnyvale Saratoga Rd., the structure was laid out around a center courtyard surrounded on 3 sides by apartments.
Heavy smoke conditions greeted firefighters upon arrival with major evacuation concerns. An Ambulance Task Force was dispatched due to the number of civilians being evacuated and unknown possible injuries. 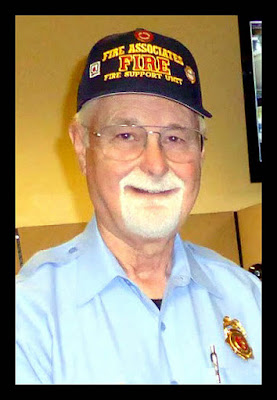 It is with great sadness that we report the passing of long-time Fire Associates member, Jerry Haag.
Jerry was feeling ill on the morning of Monday, April 11, and called 911 around 8:00 A.M. He was experiencing a very strong headache and vision problems. Mountain View Fire’s Engine 53 responded, Jerry met them at the door, and was able to talk with the crew. They took Jerry to El Camino Hospital, but he went downhill from there, and at some point lost consciousness. The diagnosis was a massive cerebral hemorrhage and there was nothing the doctors could do for him. Jerry did not regain consciousness and died that evening at approximately 7:30 P.M.

Jerry was a past-president of Fire Associates, emergency radio coordinator for the City of Mountain View, and a former civilian Fire Inspector for the San Jose Fire Department.

There will be a memorial service for Jerry at 3:00 PM on Sunday, April 17, at Immanuel Lutheran Church, 1715 Grant Road in Los Altos.  A reception will follow. All who knew Jerry are invited to attend.
Posted by John Whitaker - The Blog Master at 7:30 PM

On a rainy Sunday morning, April 10, at 4:23 A.M., San Jose Fire dispatched units to a residential structure fire that soon escalated to a 2nd alarm response. The scene was 1028 Wilsham Drive, off Ruge Drive, near Capitol Avenue and Berryessa Road.

At 5:41 A.M., Fire Associates received a pageout request for a Fire Support Unit to respond. John Whiteside met Don Gilbert and SJ Station 6 to take FSU-2 to the scene.

In the drizzly rain, they provided bottled water, hot coffee, Clif bars and donuts to the on-scene personnel, including Red Cross. Fire Associates was released at 8:00 A.M., returning to Station 6.
-- Report submitted by John Whiteside
Posted by John Whitaker - The Blog Master at 4:30 AM

Very early Sunday, April 3, at 00:03 A.M., San Jose Fire dispatched a 3rd alarm complement to the Coastal Lumber Company located at the west, dead-end of Pullman Way, cross street of Daylight Way, in south San Jose. The original dispatch was at 11:42 P.M. with reports of flames and smoke coming from 2915 Daylight Way.
The L-shaped property was enclosed on the Daylight Way side by a very tall, solid metal fence. The first arriving engine company used a ladder to climb up and peer over the fence to locate the actual fire ground. Eventually three different driveways were used to access the stubborn fire, which was debris burning inside a building.
Fire Associates received the dispatch page for a response on the 3rd alarm. John Whiteside, who had been monitoring the call on the radio, responded with Fire Support Unit 3 from San Jose Station 35, and was met on-scene by Mike Garcia.
Water, Gatorade, and Clif Bars were provided the firefighters, including the fresh, fire watch crews arriving as John was preparing to leave. John was released at 3:15 A.M., returning to station 35 and eventually home by 4:00 A.M. to get some sleep.
-- Report submitted by John Whiteside
Posted by John Whitaker - The Blog Master at 12:00 AM