Sunday evening, at approximately 6:30 P.M., Bob Gundrum responded in Support Unit 1 to a fire in Sunnyvale. Located in the Willowbend Apartments & Townhomes at 1035 Aster Ave., the fire was burning in a multi-family apartment building. Responding with Bob were FASCV members Jerry Haag and Ron Green. Jerry has issued the following report:

Details: Two-story, multi-family apartment building with fire in the walls and ceiling space. Moderate damage -- two apartments affected. E-2 took a hydrant on a 5" supply line in the front of the building, stretched a 3" to a gated wye, one 1-1/2" taken from the wye, another in standby. Also a 1-3/4" preconnect was put in service.

Remarks: Lots of wall and ceilings had to be opened to get at a small amount of fire. Submitted by: J. Haag 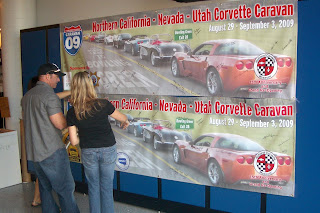 On Saturday, August 29, Fire Associates provided coffee support at the 2009 National Corvette Caravan kick-off event. Club Auto Sport, 521 Charcotte Ave., was the site of this event for Corvette enthusiasts. The 15th-annual rally will take the participants across the country on a 5-day journey to Bowling Green, Kentucky, the location of the National Corvette Museum.

FASCV got involved when San Jose Fire Museum asked us to help out with their pancake breakfast fund raiser. Because of earlier success at putting on open house events at a display of antique fire equipment, Club Auto Sport offered the event as an opportunity for the Museum and Fire Associates to raise funds. Although the turnout was not as high as had been hoped (the poor economy is suspected as the cause), our group and the Fire Museum were successful in getting good publicity and proving, once again, that we could host events of this type.

Thanks to FASCV members John Whitaker, Bob Gundrum and Ron Green for their early-morning help.

Photos of the event can be seen at: 2009 Corvette Caravan Kick-off

John's low-res video of the rally beginning can be seen at: 2009 Corvette Caravan 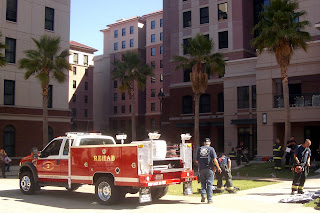 On Thursday morning, Aug. 27, at 9:02 A.M., Fire Associates was paged for a Level 2 hi-rise fire at the Campus Village dormatories (Bldg. B) at San Jose State University. Located at 355 S. 10th Street, a vintage VW van was burning in the underground garage. Arriving in Support Unit 2 was Don Gilbert who was met on scene by Mike Chappell and John Whitaker.

Building B is a 15-story structure with an underground, 2-level parking garage. It is described on the campus website as: "...the location of the upper division apartments, the Recreation Activities Center (RAC), and the Village Market. It is the centerpiece of the Campus Village and features a 15-story tower. It has one bedroom studios, and 3, 4, 5 bedroom apartments equipped with a kitchen, and living room area."

Initially called a Level 2 incident, it was briefly upgraded to a Level 3 fire by the IC before that call for equipment was canceled. At first, initial responders could not tell what type of fire they were dealing with or how extensive an area was on fire. First-in companies went down to the garage area and were met by heavy, dense black smoke requiring them to make the initial exploration with "tag lines". Once the source of the smoke was determined, fire crews could then decide how to extinguish the inferno.

Support Unit 2 was instructed to set up on the 10th Street side of the building. However, after being set up for awhile at that location, Rehab was eventually relocated in a courtyard area at the rear of the structure. Rehab was demobed at approximately 11:30 A.M.

John's photos can be viewed at: SJS - SJSU Hi-rise Fire

A good news story on the incident can be read at: SJ Merc-News

Posted by John Whitaker - The Blog Master at 3:05 PM 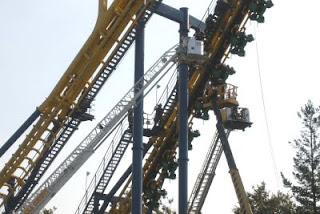 At 3:48 PM on Monday, August 10, Santa Clara Fire put out a call for Fire Associates help. This time, it was not for a fire or a Hazmat situation -- One of Great America's roller coaster rides was stuck and it was going to take hours of effort to get everyone to the ground safely.

Jerry Haag responded in Support Unit 1 and was joined at the amusement park by FASCV members Bob Gundrum and George Hoyt. Jerry has submitted the following report:

Details: Rescue from elevated location of 24 patrons of Great America Park, 40 to 80 feet in the air. Two aerial platforms (CNT T-1 and SJS T-29) and one aerial (SNC T-8) were used. Riders were released and brought to the ground individually after having been stranded since 1315. Last one down about 1715.

Remarks: A difficult situation expertly handled by personnel in attendance. No riders were injured.

A SJ Mercury-News story can be read at: Riders Rescued 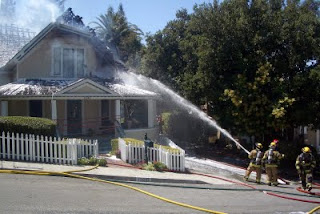 It was 1:37 PM on Tuesday, July 28, when Fire Associates was paged by Santa Clara County Fire to a second-alarm inferno. This time (it was our second call in 24 hours) the fire was in Los Gatos and involved one of the city's classic old homes. Located at 15945 Camino del Cerro, on the corner of Blossom Hill Rd., the 2-story home suffered severe damage to the attic and second floor.

Responding to the scene in Support Unit 2 was Don Gilbert who was joined by FASCV members George Hoyt and John Whitaker. Support Unit 2 was quickly on the scene as Don was already in the rig returning a tool to the County Fire Maintenance Shop. Rehab was set up on a side-street just north of the fire to take advantage of some shade on an 80-degree summer afternoon. Lemonade and cold drinks were so in demand that a seperate trip to the store to get more ice was needed.

Built in 1892, knocked off its foundation in the 1989 Loma Prieta earthquake, and restored in 1992, this building is on the city's historic landmarks list. With the owner standing by watching, firefighters quickly kept the damage to a minimum under difficult circumstances. The building's steep roof and wrap-around porch, made access to the fire tricky. Also, because of the steepness of the street, it was not possible to safely position a ladder truck for aerial access to the roof.

A very interesting video of the event can be seen at: Fire at Historic Home

Posted by John Whitaker - The Blog Master at 2:46 PM