Video of Our Run Along Mission Street, SF
Video by Bill Roth
The Fire Associates of Santa Clara Valley recently participated in an annual fund-raising event to benefit severely burned children. Held to benefit the Alisa Ann Ruch Burn Foundation, the Peninsula Firefighters Burn Relay involves a procession of antique, classic, and in-service fire and police apparatus that winds its way between Moffett Field and San Francisco. During the day-long event, the Code-3 relay stops at various fire stations to "collect" funds raised by all the departments.
This year, FSU-1 and FSU-2 both were part of the event. FSU-1 was driven by Mike Garcia with Jerry Haag along as a passenger, while John Whitaker and Bill Roth shared the driving in FSU-2. In order to stay in service, FSU-1 went as far as Menlo Park. At that point, Mike returned with the support unit to Santa Clara while Jerry joined up with FSU-2 for the remainder of the trip up to San Francisco.
At the end of the day, $87,618.72 was collected, including a donation from FASCV. The money is used to fund a week-long summer camp for severely burned children and fire safety education efforts.
John's photos from the event can be viewed at: 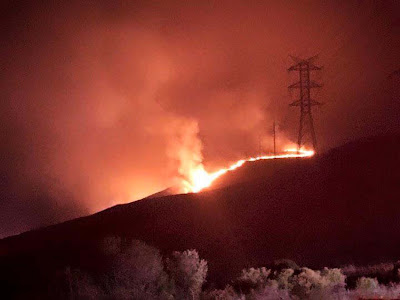 As John neared the scene, he could see a very impressive fire line snaking up the hillsides toward Santa Teresa County Park, with red lights flashing from many fire rigs alongside the flames. John was directed down a paved access road off Santa Teresa near Bayliss Avenue. This road marked the southern edge of the fire and kept the fire from spreading in that direction. Within a few minutes, less than half the fire line was visible, indicating a successful mobile attack on the mostly high-weed-covered landscape.

John provided water, Gatorade and Clif bars for the firefighters. After 2 hours, most of the fire units had been released, except for several rigs waiting for Dozer 1641 to complete a dozer line around the fire, which was estimated at 5+ acres. FSU-3 was released at 6:05 A.M. and returned to quarters.
-- Report submitted by John Whiteside
Posted by John Whitaker - The Blog Master at 3:30 AM


Details:  Fast-moving vegetation fire at the bottom of a very steep (45-degree) slope. Fire started near the road and was only about an acre when first units arrived but it quickly raced up the hill all the way to the ridge. Protecting a structure, stopping and extinguishing it took hundreds of feet of progressive hose lay, a chopper and fixed wing drop retardant drops. About 50 acres burned. Over 15 fire units on-scene. Fire Support Unit 1 arrived at about 4:00 P.M. and was released from the scene at 7:30 P.M.


Details: Barbershop in a small, single-story strip mall. Exposures on the "B" and "D" sides were threatened but aggressive attack, aided by good fire separation walls, prevented serious fire damage to the adjoining businesses. The barber shop was seriously damaged. At one point, two elevated streams were in use and three 5-inch water supply lines were on the ground. Old, heavy construction and numerous voids in the roof space lead to an extended operation. Fire Support Unit 1 arrived at about 6:00 A.M. and was released from the scene at 9:30 A.M.

-- Report submitted by Jerry Haag
Posted by John Whitaker - The Blog Master at 5:30 AM

Saturday, October 10 at 8:29 P.M., Fire Associates received a request from South Santa Clara County Fire (Cal Fire) in Morgan Hill to respond to a working structure fire on Terri Lynn Court located off Center Ave. near its intersection with Masten Ave., in San Martin. The site was about 2 miles east of Station 68.
Bill Roth lives a few miles from the scene and he was first to respond with drinks and Clif Bars. John Whiteside and his son Randy brought Fire Support Unit 3 to the scene, departing at 9:16 P.M. from San Jose Station 35. Rehab was set up with benches, cold drinks, coffee, Clif Bars and doughnuts available to the firefighters.

Fire units from Gilroy, Cal Fire, and San Jose assisted at the incident. Engine tanks and water tender shuttles were used for a water supply. The fire was contained to the home's garage, burning through the roof. After providing support, Fire Associates members were released at 11:55.
-- Report submitted by John Whiteside
Posted by John Whitaker - The Blog Master at 8:30 PM

Friday, October 9, at 6:53 P.M., Gilroy Fire paged Fire Associates to respond to south Gilroy to assist with meals and drinks for firefighters. A large grass fire was burning in the area of Travel Park Circle near the intersection of Monterey Road and Highway 101. The fire started near that location and spread southward along the Union Pacific railroad main-line right of way. The fire burned for more than 1 mile, then jumped the tracks to also burn on the property of the local sewage treatment plant.
The initial dispatch occurred around 5:30 P.M and Morgan Hill Cal Fire headquarters sent equipment, including 11 engines and water tenders from the South Santa Clara County Fire District and Cal Fire, to assist Gilroy units, while fire units from San Jose Fire covered a Gilroy station.
Fire Associates member Bill Roth responded from north of Gilroy in his POV with drinks and Clif bars. John Whiteside was already in Morgan Hill and responded after contacting Don Gilbert to bring Fire Support Unit 3 to the fire. Gilroy Fire provided burritos to the firefighters. While Bill maintained his position near the origin with his supplies, Don and John in FSU-3 were directed to follow Gilroy units onto the sewage plant property, driving on the levees around the grassy basins, which had burned. Drinks and Clif bars were provided.
It was estimated that 30+ acres burned. Rail traffic, including the No. 14 Amtrak Starlight, was halted until the track area was safe for traffic. Several freight trains came through the area, restricted to 10 mph.
At 10:30 P.M., Fire Associates members were released. Don and John were over 30 miles south of San Jose and had a late-night, un-congested drive back home.
-- Report submitted by John Whiteside
Posted by John Whitaker - The Blog Master at 6:53 PM


Details:  San Jose Fire Dept. units responded with Santa Clara County Parks and Cal Fire. Two fires, one on west side of Highway 101 at the Hellyer exit and a larger, second fire east of Highway 101 about half mile. Total 5 aces per SJS PIO.

Details:  A car hit a power pole earlier in the morning resulting in a power loss to a one-block area. PG&E arrived on scene to turn power back on at about 4:49 P.M. and then saw smoke and flames coming from the house next to the pole. Homestead Rd. was shut down north and south do to smoke.

On Sunday morning, October 4, reports of a fire were called in to San Jose Fire dispatchers at 2:45 A.M. The blaze was burning at a large, block-long strip mall called the Caribbees Center. Located in south San Jose, the main focus of the fire was in the Cho Senter Market - a large, Vietnamese-themed, grocery store at 2889 Senter Road. This area of Senter Road is located between Umbarger and Lewis Roads.

Within minutes, the alarm level was upgraded to 3 alarms and at 3:00 A.M. Fire Associates members were paged to respond to the structure fire. Not long after that, another page stated the fire was at a 4th alarm!
Fire Associates member Don Gilbert responded with Fire Support Unit 2 at 3:18 A.M. Don set up Rehab on Senter Road across the street from the fire scene. Here, FASCV members could take care of the firefighters on the “Alpha” and “Delta” sides of the fire. At 4:25 A.M., John Whiteside responded with FSU-3 and met Don on scene. At the request of Med 30, John positioned FSU-3 on Lewis Road at Hunken Drive, 2 blocks away from Don. From this location, he could handle firefighters on the “Charlie” and “Bravo” sides. Soon after John set up the second Rehab site, FASCV member Mike Garcia arrive on scene to assist.
Four aerial ladders were flowing water and at least 3 stangs/monitors were also employed. Parts of the parking lot became flooded due to blocked drains and there were concerns some businesses, not affected by the fire, might have water intrusion.

Lots of coffee, drinks, donuts, and Clif bars were consumed. Both support units were released at 9:25 A.M. and returned to their respective quarters.
San Jose Fire units were still on scene Monday morning. From some overheard radio traffic, fire units from Milpitas, Santa Clara, and Santa Clara County covered San Jose stations during this event.
-- Report submitted by John Whiteside
Posted by John Whitaker - The Blog Master at 3:00 AM