2007 Year-end Response Totals are now available on line. Thanks to FASCV member Bob Gundrum for preparing the information. Click on the following links for the data:

Posted by John Whitaker - The Blog Master at 3:32 PM

Attendees are advised to bring folding chairs as we will have to hold our meeting on the apparatus floor.

Click on this link for the meeting location and further details:

Posted by John Whitaker - The Blog Master at 3:10 PM

The January 2008 edition of "The Embers" is now available on line.
Posted by John Whitaker - The Blog Master at 3:05 PM

The memorial pamphlet for the service can be viewed at this link: John F. MacDonnell.
Posted by John Whitaker - The Blog Master at 1:45 PM

The following is a compilation of two e-mails received by Fire Associates detailing plans for Chief MacDonnell's memorial service:

Chief John MacDonnell passed away during the overnight hours of December 6, 2007 at his home. Chief MacDonnell will be remembered for his 43 years of professional devotion to the Fire Service. John, began his career in the summer of 1964 with the California Division of Forestry, (then) later served with the Orange County and Santa Barbara County Fire Departments.
He then moved from pubic service into private industrial fire protection, and later served as Fire Chief for both United Technology Corporation and the NASA Ames Fire Department at Moffett Field. John was also an instructor for First Contact 9-1-1 and helped with the development of their dispatcher training program.
A memorial will be held in Chief MacDonnell’s honor at 10:00 A.M., Friday December 14, 2007 at St. Victors Catholic Church located at 3150 Sierra Road, San Jose, CA 95132.

Information:
Lynne Engelbert
SECTEK, Inc
650-604-3112
or
Steven Kelly
Fire Chief, NAFD
650-604-6953
John's family has requested that in lieu of flowers, donations should be made in memory of John MacDonnell to the Fire Associates of Santa Clara Valley, Inc.

For those of you who may not be familiar with the important support function that the "Fire Associates" regularly provides to all Santa Clara Operational Area fire agencies, here's some cogent information about them.

The Fire Associates of Santa Clara Valley, Inc. is a volunteer, fire buff organization that since 1969 has staffed and maintained multiple fire support canteen vehicles which respond to multiple-alarm fires and other emergency incidents at all hours of the day and night (and in all types of weather!) - as well as to major drills and exercises - throughout the Santa Clara Operational Area supplying hot and cold beverages and related rehab supplies to firefighters and emergency responders.

Over the years (actually, several decades!), the "Fire Associates" unfailing and enthusiastically provided canteen services at the annual Santa Clara County "Wildfire" wildland fire readiness exercise. For many years, this exercise was delivered at and hosted by United Technologies Corporation' s site south of San Jose, where, as you know, John served as Fire Chief for many years as well as a guiding force within the Santa Clara County Fire Chief's Association in the exercise's sustainability and growth - which, in later years, included considerable participation by San Mateo and Santa Cruz Operational Area fire agencies.

Thus, there is both this professional and personal nexus between John and the "Fire Associates."

Please contact me directly at if you have any questions:

Posted by John Whitaker - The Blog Master at 5:55 PM

The monthly meeting of Fire Associates for January, 2008 will be held at Milpitas Fire Department's Station No. 3. Located at 45 Midwick Drive, Milpitas, 95035, the station is basically sits on the corner of N. Milpitas Blvd. and Midwick.

Highlight of the evening will be a walk-around of Patrol 3. Although not brand new, this rig is less than one year old and probably has not been seen by many of our members. Attendees are advised to bring folding chairs as we will have to hold our meeting on the apparatus floor.

-- Thanks to Milpitas Fire's Battalion Chief Scott Brown for making these arrangements.

Posted by John Whitaker - The Blog Master at 1:20 PM

Former United Technology Corporation (UTC) Fire Chief John MacDonnell has passed away at the age of 61. Over his career, he was a good friend of Fire Associates. Many of our members will remember coordinating FASCV support at the Live Wildland Fire Training that John arranged annually at UTC. He will be missed by all those involved in the fire service of Santa Clara County.

Additional remembrances by those who knew him can be found at this link: www.firstcontact911.com.

Posted by John Whitaker - The Blog Master at 1:08 PM 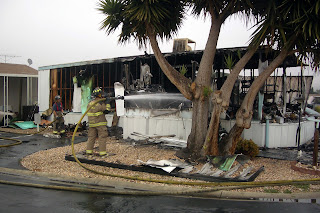 On Wednesday morning, December 5, FASCV was paged by the Milpitas Fire Department. The 7:15 A.M. page was for a 2-alarm mobile home fire at the Mobilodge of Milpitas, 1515 N. Milpitas Blvd. Jerry Haag responded in Support Unit 1 and was met by John Whitaker.

Located in space 134, the older-style, small doublewide unit was a total loss. Fortunately, the owners were awakened by the barking of their dog as no smoke detector was installed. The fire was burning in the curtains of the front room as the couple escaped with few belongings. The heroic dog was lost in the fire. FASCV was released at approximately 9:30 A.M.

John's photos of the event can be seen at this link: MIL - Mobilodge.
Be sure to check out a mention of our Support Unit in this "Milpitas Post" news report: "Mobile Home Loss...".

Posted by John Whitaker - The Blog Master at 1:04 PM 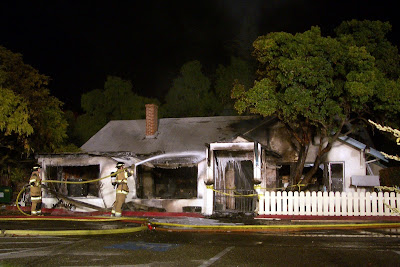 Early Tuesday morning, December 4, Santa Clara County Fire paged FASCV to 16035 Los Gatos-Almaden Rd. in Los Gatos. Don Gilbert answered the 1:58 A.M. request in Support Unit 2 and was met by George Hoyt and John Whitaker. The fire involved a house that had been converted into the "Peppertree School of Los Gatos" -- a daycare and preschool facility.

FASCV rehab operations were set up adjacent to County Hazmat 2 and were conducted in a routine fashion -- until the rain arrived! The easy-up shelter was quickly deployed and served to keep the firefighters, coffee and donuts dry in the inclement weather. FASCV was released at approximately 5:00 A.M.

John Whitaker's photos can be seen at this link: CNT - Peppertree School.
The San Jose Mercury News story can be read at: SJ Merc-News.

Posted by John Whitaker - The Blog Master at 6:31 PM 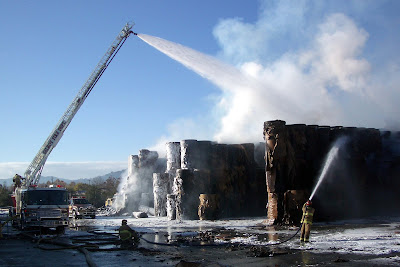 On Saturday morning, December 1, the Gilroy Fire Department requested FASCV's help at a 3-alarm fire at a cardboard box factory on the city's south side. John Whiteside and Don Gilbert responded to the 3:51 A.M. page in Support Unit 2. They were met by FASCV members John Whitaker and Mike Chappell. The fire was located at 6791 Alexander Street, Gilroy.

The fire was burning in 20-foot-high stacks of rolled, brown, craft paper. The stacks and stacks of paper were used in the manufacturing of corrugated cardboard shipping boxes. Approximately 300 rolls of paper burned through the morning hours and into the afternoon. Because of the densely pack material, fire crews had to keep the paper doused with water as forklifts busily unstacked the rolls. Every time a roll was moved, or water stopped flowing, flames would erupt. Fortunately, fire crews were able to used the company's break room has a rehab area as the morning temperatures dipped before the 40-degree mark just before sunrise.

Upon arrival, FASCV members provided donuts and coffee and then delivered and served 45 breakfast meals from a local restaurant. The Support Unit was released shortly before noon.

The fire was just one of 3 suspicious fires the erupted in Gilroy during the early morning hours. Flames also were doused at a local Ford dealership and a new, city sports complex. All fires were being investigated as possible arson.

John Whitaker's photos can be seen at this link: Gilroy Fire. The San Jose Mercury-News story can be read at: "Three Fires Battled".
Posted by John Whitaker - The Blog Master at 5:43 PM 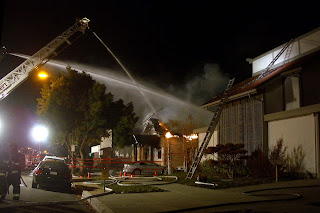 On November 27, at 11:45 P.M., FASCV was paged by the San Jose Fire Department to a 4-alarm fire. The fire involved a large, single-story, Victorian structure located at 580 N. 5th Street, in the Japantown district of the city. John Whiteside brought Support Unit 2 and was met my John Whitaker and George Hoyt, who were already on scene.

First-arriving fire crews had to rescue three occupants of the 100-year-old structure. Eight others escaped unharmed. Unfortunately, the fire resulted in the death of another resident of the boarding house whose body was not found until hours after the fire had been controlled.

John Whiteside was on scene until 5:00 A.M, when he was released by the IC.

However, a little over 3 hours later, Support Unit 2 was back at the fire in respose to a special request. Truck crews had to remain on scene throughout the morning as Arson, Homicide and Coroner's Department personnel sifted through the buildings rubble. John Whitaker responded to the 8:30 A.M. call and was joined later in the morning by FASCV members Ed Del Prete and Rick James. FASCV provided the usual morning donuts, coffee and water an later served 45 sandwiches, chips, drinks and cookies.

Posted by John Whitaker - The Blog Master at 4:52 PM