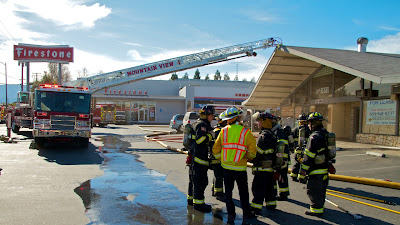 Remarks: Minor damage around the smokehouse vent. Could have been much worse if it hadn't evidenced itself during the day. Dittmer's should be back in business soon -- Yea! 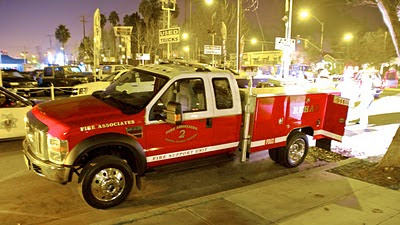 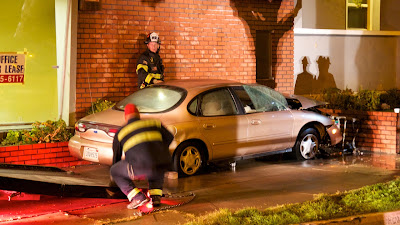 At 4:16 A.M. on Saturday, Jan. 22, Fire Associates responded to a special request from the San Jose Fire Department. A car was sitting on top of a broken gas meter at 1190 S. Second St. Don Gilbert responded with Support Unit 2 and was joined on scene by George Hoyt, John Whitaker and Bruce Dembecki.

Although the incident amounted to the equivalent of a first-alarm response, it was expected that firefighters would be on scene for an extended period of time while PG&E crews dig up the street to access a shut-off point. However, shortly after FASCV members arrived and set up a rehab location on W. Humbolt St., PG&E announced that they had been able to access a valve and had stopped the flow of natural gas. No digging was necessary. So, fire crews were released and enjoyed our hot coffee and Clif Bars before going back in service. After breaking down rehab, FASCV members celebrated the early departure by going to a nearby Denny's and having breakfast.
-- Submitted by John Whitaker
-- Accompanying photos by Bruce Dembecki
Posted by John Whitaker - The Blog Master at 4:16 AM 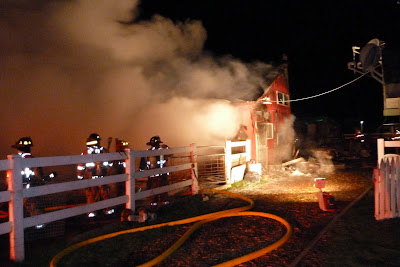 At 3 minutes after midnight on Monday, Jan. 10, the South County Fire District called for Fire Associates assistance. Located at 1060 Church Street, at the intersection with Columbet Ave., a barn was fully involved and threatening a home and several out-buildings. This location is east of the Highway 101 freeway. John Whiteside responded in Support Unit 2 and was met on scene by Mike Chappell, John Whitaker and Dan Wong.

On a very cold (and getting colder by the hour!!!) winter morning, FASCV members quickly established a rehab area and served hot coffee, donuts, and assorted Clif Bars. The air temperature by 3:30 A.M. reached a bone-chilling 28 degrees! The barn was located approximately 75 yards to the west of Columbet Ave. and was surrounded by corrals containing an assortment of small farm animals...and a llama. Several ponies were inside the barn at the time of the fire, one of which was severely burned and tended to by a neighboring veterinary doctor.

Responding for the South County Fire District were 3 engines, 2 water tenders, and Battalion Chief Ken McGeever from Cal Fire. Responding in on mutual aid were Gilroy Fire's Engines 61 and 81 along with Battalion Chief Phil King. The barn and several small sheds were a total loss, but a nearby home was saved after a small roof fire was extinguished. Fire Associates was released just before 3:30 A.M. As the serving table was being washed, the water on the table turned to ice between the time water was poured and a cleaning cloth was applied! Proof that it really was cold.