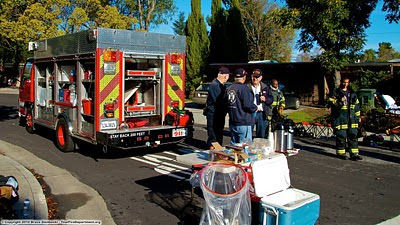 Posted by John Whitaker - The Blog Master at 8:45 AM 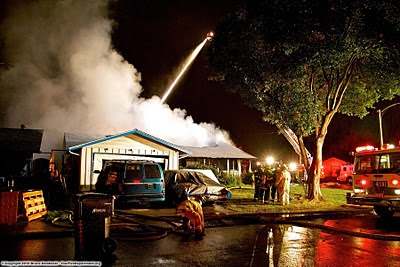 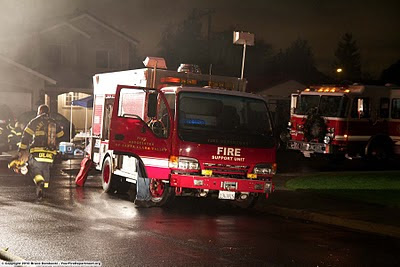 Shortly after 7:00 P.M. on December 14, the Santa Clara Fire Department responded to reports of a house fire at 190 Arcadia Ave. Fire Associates member Ron Green responded with Fire Support Unit 1 and was met on scene by members Jerry Haag and Bruce Dembecki, along with Fire Associates guest Walter Huber. With light rain falling in the area, Rehab was established under the cover of our Easy-Up awnings, and grateful fire fighters appreciated the hot and cold drinks, and the snacks.

Arriving fire units discovered the house well involved and it was determined the occupants were still inside the house. The operation quickly turned into a rescue as large amounts of property inside the house created difficulties for firefighters and fuel for the fire. A second alarm was struck and eventually a third alarm for Mutual Aid to provide district coverage around Santa Clara.

Firefighters successfully affected the rescue of the house's occupants, but the extensive levels of property within the house made inside operations impossible and fueled a rapidly growing fire. The operation went defensive and firefighters worked to control the blaze from the outside, with Truck 2 providing a master stream.

The fire was contained to the house, and by around 10:00 P.M., the IC decided the best approach was to continue to contain the fire inside the house from the exterior, and make efforts in the light of day to pull apart the smoldering materials inside the house and finally extinguish the fire. Most fire units and FSU1 were released by 10:30 P.M., with a smaller contingent of fire personal remaining on scene overnight to operate fire watch.

Posted by John Whitaker - The Blog Master at 7:00 PM

Fire Associates' Member Gets Involved in the Holidays 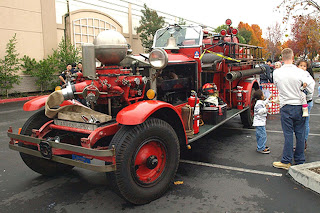 The following is reprinted from "Beyond the Badge", the December issue of the Sunnyvale Dept. of Public Safety's on-line newsletter:
The Sunnyvale Department of Public Safety hosted its third annual Rides for Toys event on Saturday, December 11. During this free special charity event, each child who donated a new, unwrapped toy was given a ride on a Sunnyvale fire engine.
The event was a major success. DPS firefighters collected enough toys to fill up a 15 passenger van from Sunnyvale Community Services.  Len Williams, from Fire Associates of Santa Clara Valley, brought his 1920's fire engine for viewing, which was a huge hit with the families.
Parents had a chance to discuss fire safety with Sunnyvale Public Safety personnel and received informational brochures. Sunnyvale firefighters presented the donated toys to Sunnyvale Community Services, One of the biggest demands this year for Community Services are toys.
Posted by John Whitaker - The Blog Master at 9:00 AM