Early on Tuesday morning, June 21, San Jose Fire called for Fire Associates help at a 5-alarm fire burning in a fraternity house near the San Jose State University campus. It was 4:00 A.M. when the pagers went off, and Don Gilbert and John Whiteside responded to the call in Support Unit 2. They were greeted on scene by FASCV past president John Whitaker and later joined by members George Hoyt, Dan Wong and Jerry Haag.

The fire was burning in the Kappa Sigma fraternity house located at 168 S. 11th Street. Eleventh Street, between E. Santa Clara Street and E. San Salvador is known as "Fraternity Row." Well, there's now one less frat house on the block. First-arriving engine companies found the fire originally burning in an attic space. The fire quickly spread, however, and the fire attack eventually went defensive as the entire structure eventually was involved.

By the time Support Unit 2 arrived on the scene, three-alarms-worth of equipment was positioned all along 11th Street, making it difficult to maneuver the support unit to the rehab location in a driveway directly across from the burning structure. At about this time, a fourth alarm was called as an extra truck company was needed on the "Bravo-Charlie" corner of the structure and an engine company was needed to staff Rehab. News reports listed an additional 5th alarm for station coverage.

Rehab proved to be a busy place as hot and tired crews were rotated through on a warm, late-Spring morning. By 5:00 A.M., temperatures were near 70 degrees. In addition to six Fire Associates personnel, Rehab was staffed by an engine company and a minimum of 2 AMR crews and supervisors - making for a very crowded work area. Lemonade, Gatorade and water proved to be very popular and many pots of coffee were brewed to help wake everyone up during the early morning hours.

Fire Associates was released from the incident just before 8:00 A.M.

Posted by John Whitaker - The Blog Master at 4:00 AM 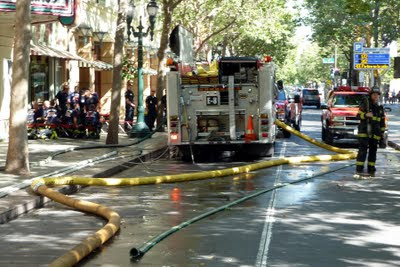 On Monday, June 20, shortly before 4:00 P.M. on a very hot, late Spring afternoon, the San Jose Fire Department asked for Fire Associates to respond to a downtown structure fire. John Whiteside and Bruce Dembecki responded in Support Unit 2 to the call at 56 S. Second Street. They were met on scene by John Whitaker, George Hoyt and Mike Chappell.

Although originally reported as a "fully involved apartment fire," the blaze was actually burning on the structure's roof. Apparently, the area functioned as a smoking deck for the building's residents. As temperatures registered well into the 90s, exhausted firefighters were met by lots of cold water and Gatorade when they arrived in Rehab. With the fire located on the fourth-floor roof, accessed by a narrow stairwell and exposed to the blazing sun, it proved to be a very tiring incident for all those involved. Fortunately, Rehab was located in the shade along the tree-lined sidewalk.

Posted by John Whitaker - The Blog Master at 3:52 PM