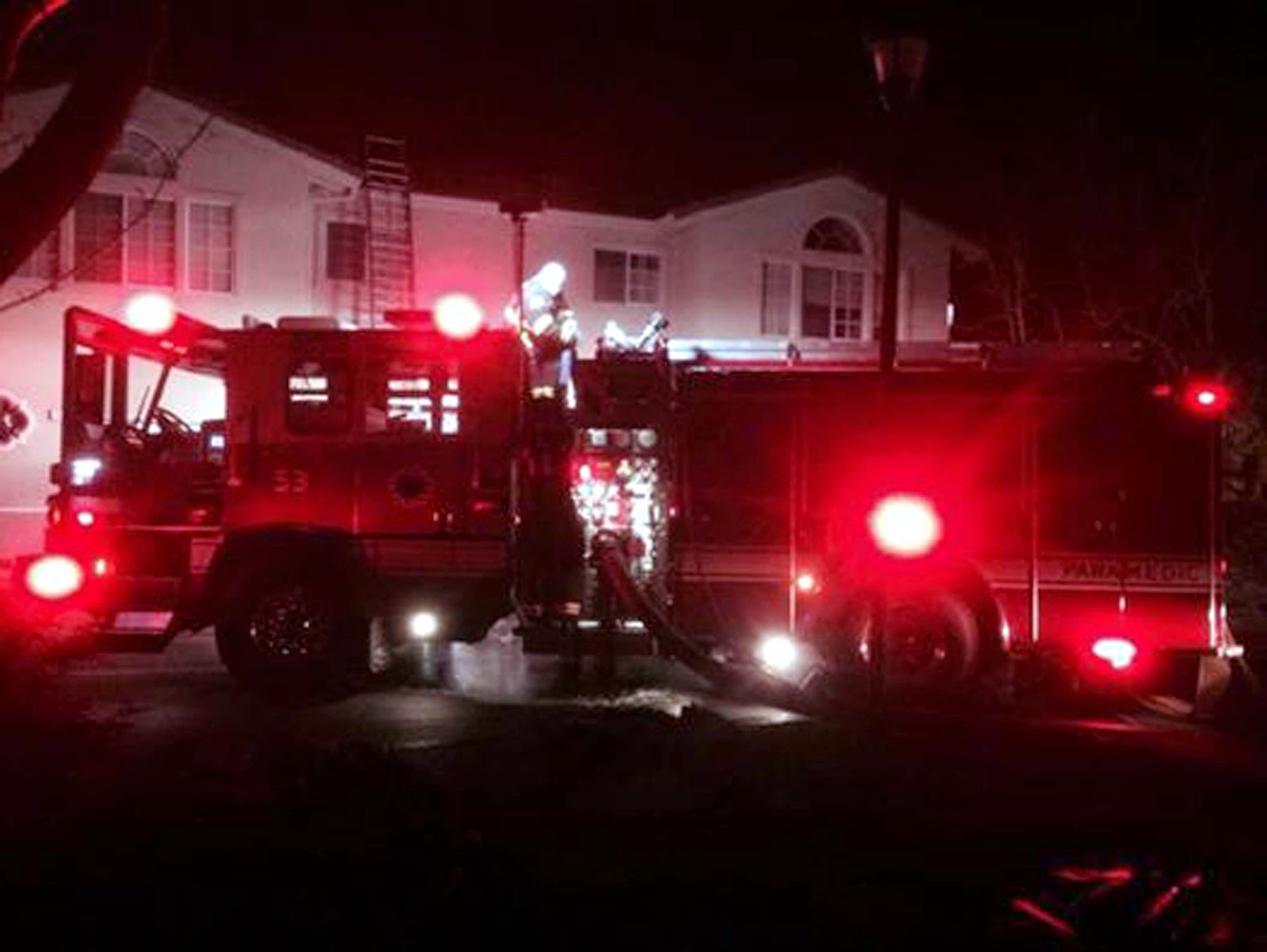 -- Report submitted by Jerry Haag
Posted by John Whitaker - The Blog Master at 12:04 AM

Construction projects don't always go the way they were planned.

Such was the case on Tuesday, January 20, when a construction crew hit a 4-inch gas line in front of 2160 Tully Road in San Jose. Located just to the north of the Eastridge Mall, gas was escaping from under the roadway with first-arriving fire crews got on scene.
Because the leak was in a large-size distribution line, the leak prompted the evacuation of 12 businesses on both sides of the street. This necessitated a full first alarm response from the San Jose Fire Department with the aid of  additional crews to help with the evacuation process. While engine companies poured water to help locate and dissipate the escaping gas, the entire 6-lane roadway was closed to traffic between Quimby Rd. and Capitol Expressway. With the busy commute hour approaching, this made for heavy traffic on the surrounding roads in the area.
At approximately 4:30 P.M., an hour and a half into the incident, the IC requested Fire Associates assistance at the scene. It had become obvious that this was going to be a long operation as PG&E crews first worked to determine how to proceed with the shutdown of the gas line, and then worked to excavate the site and get the gas shut off.
Don Gilbert and John Whiteside answered the request and responded to the scene in Fire Support Unit 2. While they were in route, FASCV member John Whitaker went to the scene in his personal vehicle. Access was extremely difficult as the roads in the area are divided by concrete curbing and traffic was backed up. In addition, key access points to the parking lots where the command center was located had been blocked off with cones and warning tape. With the help of firefighters, John eventually arrived at the command post and it was determined that this location was the best place for a rehab area. The challenge then was to get the Support Unit into the same site once it arrived on scene. Not an easy task!
With the dinner hour approaching, and PG&E work progressing slowly, John Whitaker worked with the IC to get meals delivered to firefighters. Sandwiches were ordered by San Jose Fire Dispatchers from a nearby Togo's -- and then the challenge was getting out of the Command Post area and through traffic in order to pick up the food from a site that was less than a quarter mile away. Sounds easy -- but it wasn't.
Fifty sandwiches were eventually delivered to the firefighters on scene. They had already been taking advantage of Fire Associates' hot coffee, Gatorade, and Clif Bars. Needless to say, the sandwiches disappeared quickly to appreciative firefighters.
At approximately 7:30 P.M., after PG&E had stopped the flow of gas, Fire Associates was released from the incident. Fire crews had already been released as PG&E took over the entire operation. The roadway was expected to be closed through the night while repairs were made.
-- Report submitted by John Whitaker
Posted by John Whitaker - The Blog Master at 4:30 PM


On January 14, which was a cool, 44-degree mid-winter morning, Fire Associates was paged to a 3-alarm fire at 380 Terraine Street. Located just north of San Jose Fire Station No. 1, the fire was burning in an large, abandoned industrial warehouse. The 1-square-block site included the involved 12,000-square-foot structure located on the southeast corner of Terraine Street and Bassett Street.
First-arriving firefighters discovered that the entire bowed-truss roof was fully involved. A second alarm was quickly called to bring adequate equipment and personnel to the scene. A surround-and-drown strategy was initialed with Trucks 1, 29, and 30 providing aerial master streams. The IC for the incident was BC Joel Phelan, who happened to be working his last shift before retirement. What a way to go out!
When the third alarm was struck, Fire Associates was called for rehab assistance.  John Whiteside responded from Station 6 with Fire Support Unit 2, while John Whitaker went to the scene in his personal vehicle. After conferring with SJ Med30, Mike Van Elgort, a rehab location was decided upon in a parking lot across San Pedro Street from the fire. This was also the location of the incident command center. John and John were later joined by FASCV member Mike Garcia.
When FSU-2 arrived on scene, a rehab area was established to provide hot coffee, hot chocolate, and Clif Bars to the fire crews as they were relieved. As a "surprise", a pink box or two of donuts were anonymously provided to the firefighters. Something about "...Joel's last shift."
When the fire was totally contained and under control, fire companies were put back into service and rehab was broken down by 7:10 A.M.
-- Report submitted by John Whitaker

Posted by John Whitaker - The Blog Master at 4:00 AM