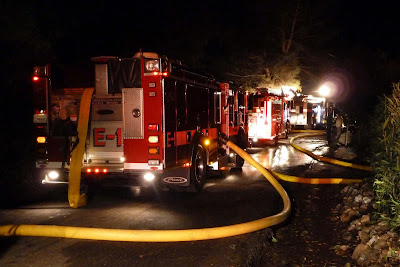 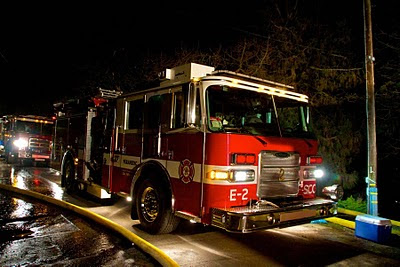 History will show that at apporoximately 6:25 P.M. on Monday, Nov. 29, Fire Support Unit 3 made its first run out of SJFD Station 35. We say that with tongue-in-cheek, but the fact is, that's what happened. The "new" FSU-3 is actually our former FSU-1 that has been renumbered and stationed at SJFD Station 35 specifically to better cover the south end of the Santa Clara Valley.

At 6:03 P.M., South County Fire called for Fire Associates' assistance at a structure fire in the Holiday Lakes Estates area of Morgan Hill. FASCV president, John Whitaker, was behind the wheel, and Bruce Dembecki was along for the trip, as FSU-3 pulled out of the station and headed down U.S. 101 for the East Dunne Ave. exit.

Once on scene at 3069 Butterfly Lane, FSU-3 was positioned just up the hill from the incident as the narrow roads in the area limited access to the fire scene. John and Bruce were joined by FASCV member Mike Chappell. As the evening turned into a cold night, one would think that hot coffee would be the beverage of choice. But, fire crews seemed to prefer Gatorade and water after a lot of hard work to get at the stubborn flames. The structure was located on a hillside above Lake Anderson and was not easily reached on the downhill side -- where most of the fire was burning!

A resident, who was at home at the time, said that she noticed "a flickering out on the deck" and went to investigate. When she got to the window, she noticed that her feet were getting warm and knew that something was not right. That was a good guess, as the fire made its way into the kitchen and living room areas by the time fire crews arrived at the remote location.

All who were on scene braved very cold temperatures, making a dinner from Jack-In-The-Box more appreciated than one might normally think. By the time FSU-3 was released, the temperature had dropped into the low 30s. FSU-3 was back in the station and ready for service by 12:15 A.M.
-- Accompanying photos by Bruce Dembecki and John Whitaker

Posted by John Whitaker - The Blog Master at 6:03 PM 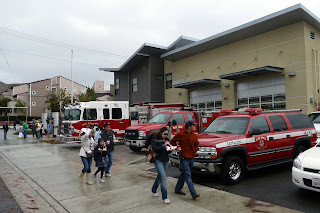 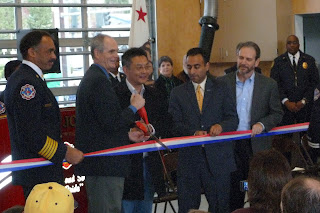 Fire Station 19 has relocated from their existing address at the corner of Piedmont Road and Penitencia Creek Road. In March 2002, the City of San Jose voters passed the Neighborhood Security Bond Act that approved the issuance of General Obligation bonds to fund the construction of public safety facilities. Fire Station 19 was one of the stations selected for relocation as part of the program to improve service delivery.

The new Fire Station 19 is a two-story, 6,049 square-foot, single-company fire station with two apparatus bays. Construction started in September 2008 and was completed over the summer. 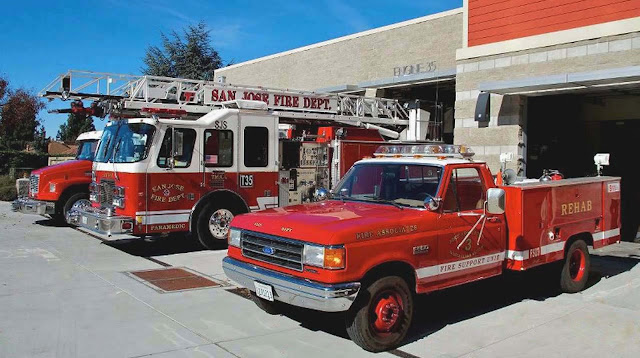 Fire Associates is very pleased to announce that Fire Support Unit 3 is now in service at SJFD Station 35. The custom-built, 1989 Ford F-350 is located in an apparatus bay that was designed for a future Battalion Chief. Until that assignment happens, we have been approved to occupy the space. The station's address is 135 Poughkeepsie Road - between Blossom Hill Road and Cottle Road.

This move is a milestone in the 41-year history of our organization. Now, for the very first time, we have 3 support units in front-line service at 3 different locations throughout Santa Clara County.

This has been a long process that began with the purchase of our very first brand new rig in 2009. Because that rig, a 2008 Ford F-550, is diesel-powered, it necessitated a move out of our long-time home at Station 26, to new quarters at Station 6. Station 6 had the required Nederman exhaust extraction equipment that Station 26 did not. Then, in 2010, we purchased another rig that became FSU-1, which is based in Santa Clara. The former FSU-1 then became FSU-3, and because of the Nederman requirement, it sat idle in a warehouse for a few months. Did you follow all that?

Now, within the last month, we received approval from the San Jose Fire Department to place FSU-3 into service at SJFD Station 35. The approval was made possible by the efforts of Retired Deputy Chief Dana Reed; Deputy Chief Joseph Carillo; and Apparatus Program Manager, Robert Culbertson.
Congratulations to all...

Posted by John Whitaker - The Blog Master at 5:59 PM 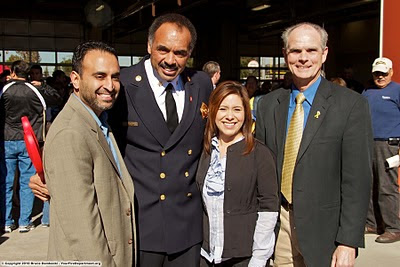 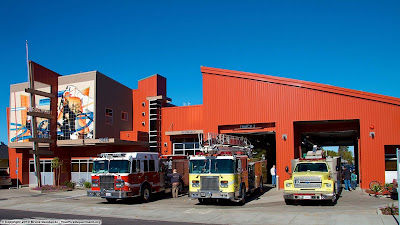 On Saturday morning, Nov. 13, the San Jose Fire Department held a grand opening ceremony and ribbon-cutting for their new Fire Station No. 2. Located at 2949 Alum Rock Ave., the station replaces one that has been on the site for 60 years. Known as "The Rock" and "Empire Station", the station is home to Engine 2, Truck and Light Unit 2, and Patrol 2.

Fire Associates members Don Gilbert and and Bruce Dembecki were in attendance on a warm, fall day. Bruce reports that they "...saw lots of old and new friends, watched them open the fire station, got a nice BBQ lunch."

To learn more about the opening, read this article from the San Jose Mercury News:
-- Report and Photos Submitted by Bruce Dembecki 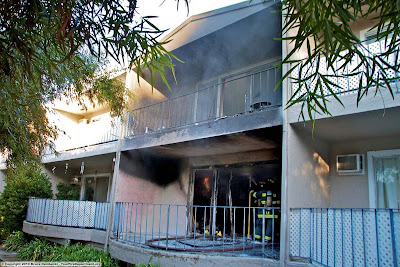 Details:  Two-story apartment building over carport
Remarks: Fire started in first floor apartment, spread across width of apartment unit and out of both ends to floor above. Aggressive attack was successful in keeping it out of the attic especially in light of well developed fire upon arrival of first company. Approximately 10 persons displaced, one injured person transported.
Units in Attendance:
SNY: Engines 1, 10, 2, 3, 30, 4, 40, 5 and 6; Truck 2; Rescue 2; Med 8; Batt. 3
SNC: Truck 2 and one engine for station fill
MTV: One engine for station fill

Details:  Open-air, detached carport. 6 cars destroyed or damaged.
Units in Attendance: Engines 1, 5 and 9; Truck 2; Rescue 2; Batt. 1 (Dellamaggiore [IC])
Remarks: Engine 9 first in, followed closely by Engine 5. Each established own water supply and each pulled a 2-1/2" and a 1-3/4" attack line, E-9 on the Monroe street side and E-5 on the Marchese Way side. Engine 1 and other units were released before arrival of FSU-1.

-- Report Submitted by: J. Haag
Posted by John Whitaker - The Blog Master at 2:27 AM 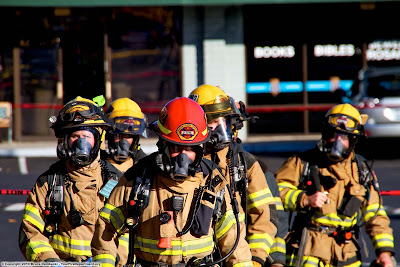 Posted by John Whitaker - The Blog Master at 2:29 PM 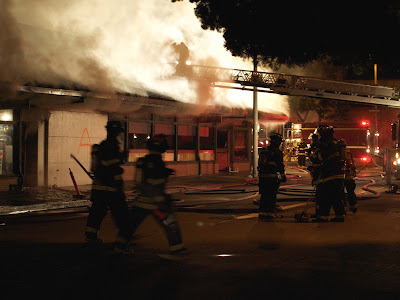 Date:  02 November 2010 Time:  0317 Sonitrol page (initiated by Gundrum); 0645 Release Type:  Structure Size:  2 alarms with special call for MTV to provide two engines for station fill. Jurisdiction:  Sunnyvale Location:  190 W. Washington St. Details:  Multi-occupancy, two-story, mercantile building; main occupant a restaurant. Remarks:  Engine 1 first in. Fire in the ceiling/attic of second floor utility room. Pulled one 2-1/2" and three 1-3/4" handlines and laid two 5" water supply lines. A 5" line was deployed from the intake manifold of E-1 and supplied intake of T-2 (a quint) on the "A" side. Ladder pipe was not used. T-1 set up on the "B" side and raised its stick as well. Fire proved hard to find and harder to reach with water. Building is restorable.SNY Units in Attendance: Engines-1, 2, 3, 4, 40, 60; Trucks-1, 2; R-2 and Med. 8. IC was Third Batt. Chief Pitts. Responding Members:  Bob Gundrum (driver), Jerry Haag and Len Williams Fire Support Unit Responding:  FSU-1
-- Report Submitted by:  Jerry Haag
-- Accompanying Photo by David Thompson
Posted by John Whitaker - The Blog Master at 3:17 AM 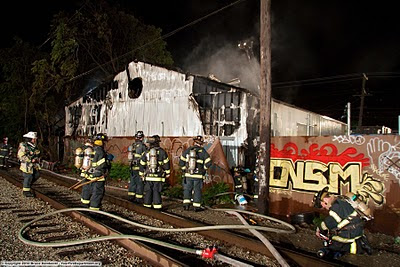 Posted by John Whitaker - The Blog Master at 3:09 AM