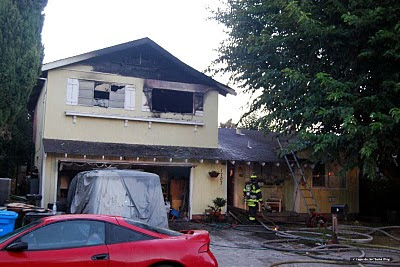 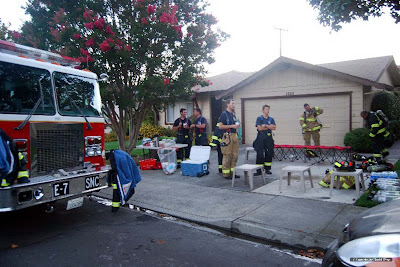 At 5:25 A.M. on Friday August 27, Santa Clara City Fire called for Fire Associates help. Jerry Haag responded in Support Unit 1 and was met on scene by Dan Wong. Jerry has provided this report: 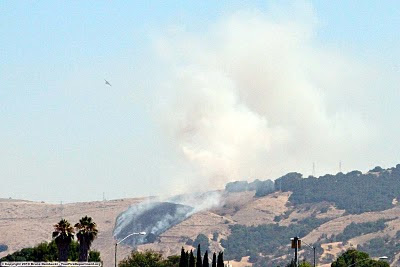 On Thursday afternoon, Cal Fire made a special call for Fire Associates' help at a vegetation fire in Santa Teresa County Park. Attacking jointly with San Jose Fire, Cal Fire was fighting the grass fire in the foothills off Bernal Road. John Whitaker responded to the call for help in Support Unit 2. He was joined on scene by FASCV members George Hoyt, Herman DeKruyff, Dan Wong and John Whiteside.


Firefighters arrived nine minutes after the alarm was first sounded shortly after 2:00 P.M. Ten San Jose City fire engines, plus firefighters from the California Department of Forestry and Fire Protection, had it under control about two hours after it began. Fire Associates provided some water and Gatorade to firefighters, but the Cal Fire engines that remained on the scene for mop-up were self-contained for their rehab needs. Fire Associates was on scene for approximately 1 hour before being released shortly before 6:00 P.M.

Posted by John Whitaker - The Blog Master at 8:43 PM 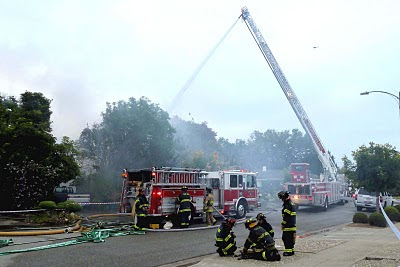 On Thursday morning, Aug. 26, Fire Associates was paged at 4:46 A.M. to a 3-alarm house fire in San Jose. The fire was burning in a home located at 910 Del Monte Place on the city's west side. Don Gilbert responded in Support Unit 2 and was joined by Jerry Haag, John Whitaker, George Hoyt and Dan Wong.

After several days of record warmth, this morning saw the return of the area's natural air conditioning -- fog and overcast off the S.F. Bay. So, instead of serving the ice cold beverages of the past week, hot coffee was now the order of the day. A dozen or more pots were made during the course of the morning.

A unique aspect of this incident was the mix of Fire units on scene. An earlier, multi-alarm house fire located not too far away had the close-in units to this fire already committed. So, the first-in engine companies to this fire were rigs from downtown stations. It's not very often you see San Jose Engines 3, 7 and 26 along with Trucks 1 and 13 out in the suburban, westside neighborhoods! In addition, Med 30 was also at the earlier fire, so Fire Associates' ability to set up and staff Rehab was doubly important.

The nature of the fire was also unique. First reports were of an explosion in the garage and, in fact, first-arriving firefighters found the natural gas line to the home broken ahead of the metering valve and on fire. This meant that the firefight had to be conducted from a distance while awaiting the arrival of PG&E to dig up the line and pinch it off. Once a PG&E backhoe was on scene, that operation went quickly and firefighters could then finish extinguishing the flames and assess the damage. Also hampering the effort was the dense foliage that was part of the landscaping surrounding the home which made access to the structure difficult.

Posted by John Whitaker - The Blog Master at 8:28 PM 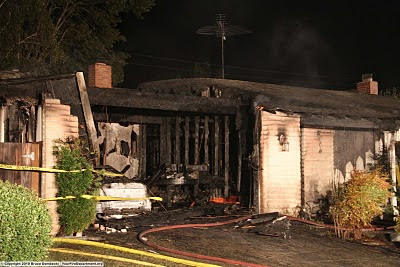 Posted by John Whitaker - The Blog Master at 8:22 PM


On Tuesday, Aug. 24, Sunnyvale firefighters responded to a full first alarm on a day of record hot temperatures in the Silicon Valley. Bob Gundrum responded to the incident to provide rehydration services and was later joined by Jerry Haag in Support Unit 1 and Bruce Dembecki in Support Unit 2. FASCV member Dan Wong also was on scene. Jerry has provided the following report:

Details: Fire in multi-story townhouse-style condo, spread into attic space. Held to unit of origin. The voluntary response by Bob Gundrum was based on radio traffic. Initial hydration services by Gundrum followed by request from IC for Fire Support Unit on Special Call.

Posted by John Whitaker - The Blog Master at 9:09 AM


At 3:26 P.M. on Tuesday, Aug. 24, San Jose made a special call for Fire Associates' assistance. With record high temperatures hitting 101 degrees on the fireground, firefighters were in great need of fluids, shade and rest. Because of the extremely hot temperatures, Jerry Haag and Bruce Dembecki responded in Support Units 1 and 2, respectively. They were met on scene by FASCV members George Hoyt, Don Gilbert, John Whitaker and Dan Wong.

The fire had started in the rear yard of 4896 Moorpark Ave. and then spread to the eaves and into the attic. With several homes in the area shingled with wood shakes, firefighters not only had the fire to contend with, but also initiated embers patrols throughout the neighborhood. Due to the conditions, a second alarm was called for relief fire crews and a special call was made for Fire Associates assistance. Firefighters were primarily in need of rest and rehydration. FASCV provided cases of ice-cold water and Gatorade as well as deploying our Insta-Benches and misting fan. FASCV members stayed until the last crews were released at approximately 6:30 P.M.

Posted by John Whitaker - The Blog Master at 9:54 PM 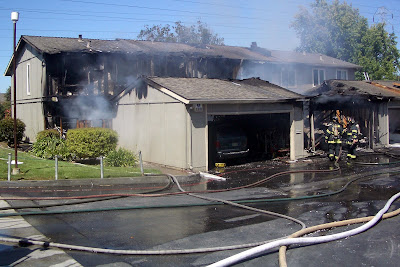 Shortly after 10:00 A.M. on Sunday morning, Aug. 22, the San Jose Fire Department responded to a fire in the Evergreen District on the city southeast side. The 3-alarm fire was located in a complex of apartments at 3309 Canongate Court. Don Gilbert responded in Support Unit 2 and was met on scene by FASCV members John Whitaker, Mike Chappell, Bruce Dembecki and Dan Wong.


The fire began in a detached garage area, but quickly spread to the apartment complex located to the rear of the garages. Once on scene, FASCV provided the usual cold drinks on a warm, summer morning. We were also asked to pick-up and serve 50 Togo's sandwiches. John Whitaker and Bruce Dembecki picked up the meals as the large order was split between two different Togo's locations. FASCV was released from the scene at approximately 2:00 P.M.

Fire Associates in the News 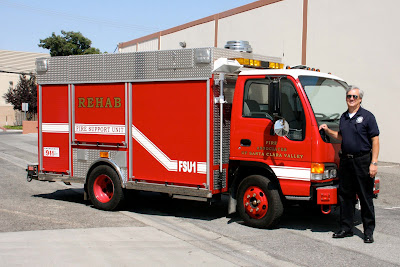 Recently, John Whitaker, FASCV President, and Jerry Haag, a member of the Board of Directors, met with a reporter from the Santa Clara Weekly newspaper. The organization had been approached by Melissa McKenzie to do a story about the group's fire support operations. Melissa and her photographer were very interested in what they heard.

The interview was conducted at Santa Clara City Fire Station 9. Since the newspaper's circulation area is primarily within the City of Santa Clara, it was thought appropriate to meet at the station that houses our support unit that covers that vicinity.

The result of this meeting was a very nice, full-page article (with photos) that appeared in the August 18 - August 24, 2010 issue of the newspaper. If you live within the circulation area, check it out on Page 7. If not, you can read the article on line at this link: "Santa Clara Valley Group Helps Firefighters"

-- Above photo from the Santa Clara Weekly
Posted by John Whitaker - The Blog Master at 8:02 PM